The citizens of Celoron, New York, may soon have a reason to love Lucy all over again.

A controversial statue of Lucille Ball (pictured below) that was unveiled in Ball’s hometown of Celoron last year will be replaced by a new statue on Saturday, marking what would have been the comedian’s 105th birthday.

The new statue was created by Hudson Valley sculptor Carolyn Palmer, who won a national competition in which more than 65 sculptors vied to create a statue to replace the widely criticized original. 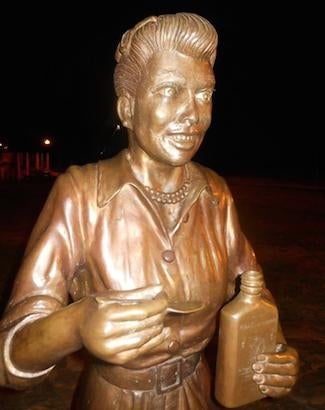 “I not only wanted to portray the playful, animated and spontaneous Lucy, but also the glamorous Hollywood icon,” Palmer said of her bronze creation, which took nine months to complete. “I just hope that all the Lucy fans are pleased and that Lucille Ball herself would have enjoyed this image of her.”

Upon its unveiling, the original sculpture was met with widespread criticism, with fans of Ball calling it “terrifying” and “ghoulish.”

One resident of Celoron even launched a Facebook page, “We Love Lucy! Get Rid of This Statue,” to register his disgust.

The new statue will be unveiled during a public ceremony at the Lucille Ball Memorial Park.