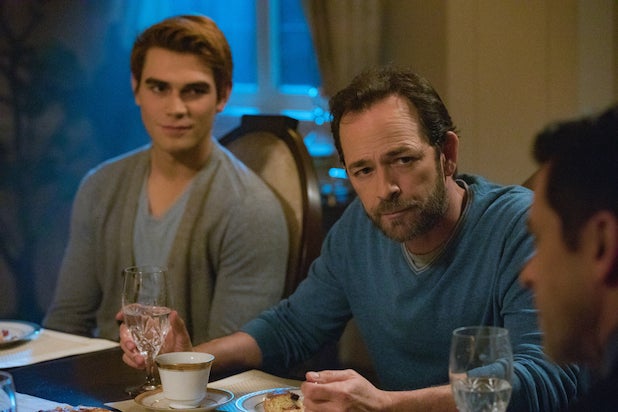 “Riverdale” will air its first episode tonight since the death of star Luke Perry, who played Fred Andrews, the kind and loving father of The CW drama’s leading character, Archie (K.J. Apa).

Showrunner Roberto Aguirre-Sacasa gave fans a hint at what they can expect when they tune in to see Perry on screen Wednesday night – two days after he died at the age of 52, following a “massive” stroke last week — which is yet another plot featuring Fred taking care of his boy.

“Going through pictures on my way to set,” Aguirre-Sacasa tweeted Wednesday morning, along with a photo of the cast, which prominently featured Perry. “From the early days. With Luke in the middle. Our heart, always. Tonight’s episode of #Riverdale finds Fred doing what he does best–helping Archie. It is dedicated to Luke, as all episodes will be for the rest of our run.”

Production was shut down on “Riverdale” on both Monday and Tuesday after Perry’s death.

Aguirre-Sacasa, fellow executive producers Greg Berlanti, Sarah Schechter and Jon Goldwater, along with studio Warner Bros. Television and network The CW released the below statement together on Monday.

“We are deeply saddened to learn today about the passing of Luke Perry. A beloved member of the ‘Riverdale,’ Warner Bros. and CW family, Luke was everything you would hope he would be: an incredibly caring, consummate professional with a giant heart, and a true friend to all,” they said. “A father figure and mentor to the show’s young cast, Luke was incredibly generous, and he infused the set with love and kindness. Our thoughts are with Luke’s family during this most difficult time.”

Warner Bros TV did not immediately respond to TheWrap’s request for comment on the status of production Wednesday, as Aguirre-Sacasa’s tweet indicates he’s “on [his] way to set.”

Perry had appeared in 52 of the 57 “Riverdale” episodes. The show, a dark take on the “Archie” comics, has already been renewed for Season 4.

Going through pictures on my way to set. From the early days. With Luke in the middle. Our heart, always. Tonight’s episode of #Riverdale finds Fred doing what he does best–helping Archie. It is dedicated to Luke, as all episodes will be for the rest of our run. ????❤️???? pic.twitter.com/Nx8iCFBoMe