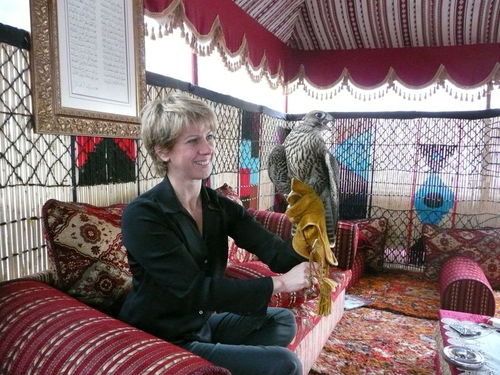 They sit on the floor around a low table, inside a sumptuous mansion in Abu Dhabi where a pet falcon, hooded, stands on the floor in the entryway. His Excellency Mahomed Khalaf al Mazrouei, chairman of the Abu Dhabi Media Corporation and head of the state’s Culture and Heritage authority, has invited me to lunch with his entourage. There is no way I would say no. The table is crowded with heaping plates of food: chunks of lamb with rice; whole grilled fish; more rice, plain white; marinated salads; fresh greens; cans of soda. “Do you want to eat with your hands?” I’m asked. It’s a challenge to which I can rise, but only so far. The men, dressed in white dishdashas with their keffiyas flipped back, take handfuls of rice and roll them in the palm of one hand, shaping the food into a ball and then rolling the ball deftly toward their fingertips. This is an art, albeit an art of Bedouin culture.

My host, known as Abu Halaf, rolls his food in the palm of one hand while checking his Blackberry with the other. In his early 40s, Abu Halaf is one of the dynamic young leaders in Abu Dhabi who is on a mission to bring his country — and indeed his entire region — into a new era. “In five years, we will have a revolution,” he says, by which he means a revolution of education, professional training, technology and infrastructure. He is investing vast sums of money into culture and media and like everybody else in this country, he is in a big hurry. The government division that Abu Halaf leads, Culture and Heritage, has only existed for the past eight months. In that time, Abu Dhabi has thrown investment into both traditional cultural pursuits (Abu Dhabi broadcasts a wildly successful Arab poetry contest a la American idol) and more cosmopolitan ones (such as translating thousands of books into Arabic, to remedy the lack of access for Arabic speakers to a broad range of thought). The $1 billion film fund, his initiative, was only announced earlier this year. It goes hand in hand with more grass roots efforts, underway since only June, to bring Hollywood insiders to Abu Dhabi via a group called “The Circle,” and to send young Emiratis abroad to intern and train in the entertainment industry. Is he not worried that other Arab peers, or even Emiratis, might disagree with such aggressive plans to take Abu Dhabi in this direction? No, Abu Halaf says, he’s not worried. There is always criticism for anyone who takes a strong position. And he quoted an Arabic saying, which his spokesman translated: “The train has left the station.” Abu Halaf corrected him: “No,” he said. “It’s more like – ‘The caravan is going to leave, while the dogs are still barking.’” Later, he let me hold his falcon.