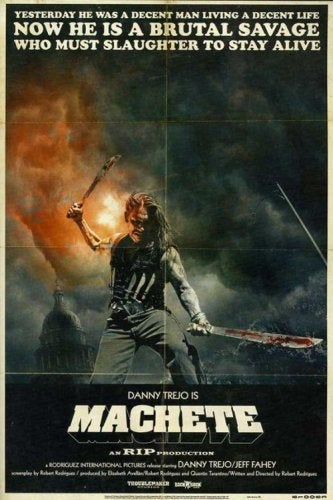 The Robert Rodriguez film “Machete” went and messed with Texas, and now a controversy over how it portrays the state could be putting its tax incentives in jeopardy, The Fort Worth Star-Telegram is reporting.

The Austin filmmaker’s movie about a Mexican day laborer-turned-assassin takes place in Texas, where the hero faces a vengeful drug lord and politicians who stand against illegal immigration.

Conservatives are upset with the Texas Film Commission, which could grant tax incentives to Rodriguez’s Austin-based Troublemaker Studios. The application was filed before shooting began, but the commission has the power to deny the incentives if a film includes content that’s inappropriate or portrays Texas or Texans negatively.

Gov. Rick Perry’s office, which oversees the commission, would not comment on the film specifically, only saying that it must review the film before state funds are released. “Machete” is set to hit theaters Sept. 3.

Read more at the Fort Worth Star-Telegram.