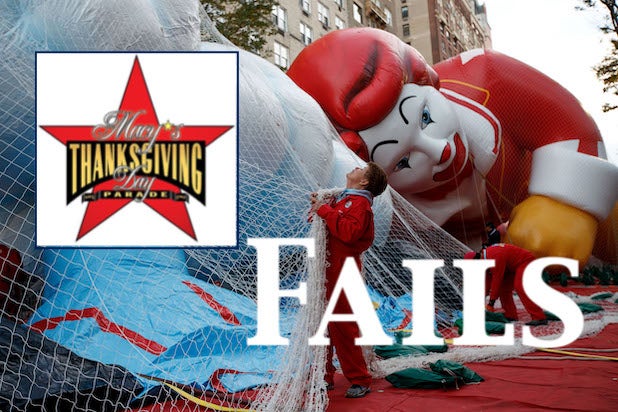 Turkey Day is here, which means that all across America, La-Z-Boys have been dragged in front of TVs because the annual viewing of the Macy's Thanksgiving Day Parade is upon us. One way to get hyped for this year's festivities is to remember some of the most epic fails of years past. From the infamous Uncle Sam and Spider-Man incident of 2012 to the numerous bystanders injured when balloons collided with street lamps, here are some of the most unforgettable -- and uncomfortable -- moments in the parade's history. 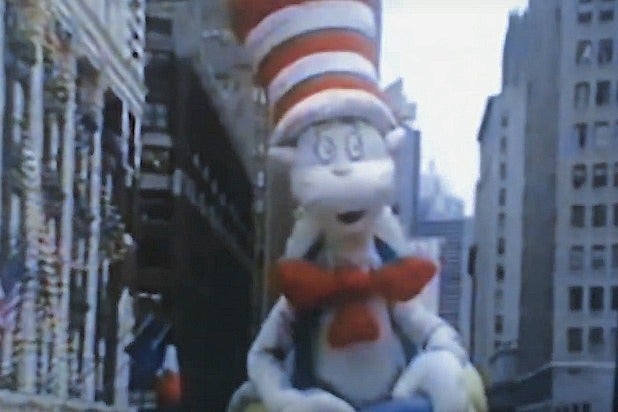 NBC
Cat in the Hat Balloon Hits Lamp Post, Injures Woman  In 1997, the "Cat in the Hat" balloon hit and broke a lamp post. A rogue piece of the metal fixture flew and hit a woman in the head, fracturing her skull, the New York Post reported at the time. She spent a month in a coma, and later sued Macy's for $395 million in damages. 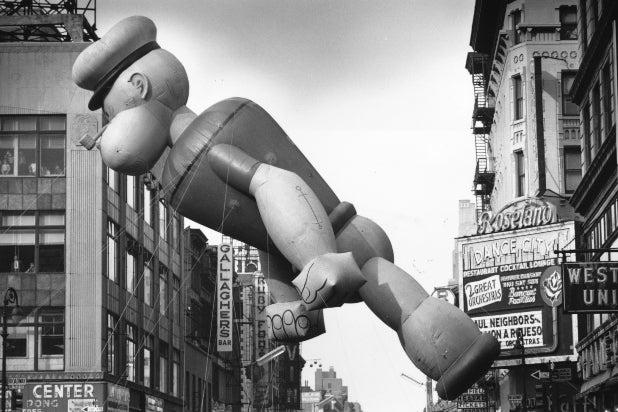 Getty
Popeye Dumps Water on Crowd   In 1957, Popeye the Sailor Man's hat collected so much rainwater that it filled up and, well, it had to go somewhere... so it dumped onto unsuspecting parade-goers beneath it. 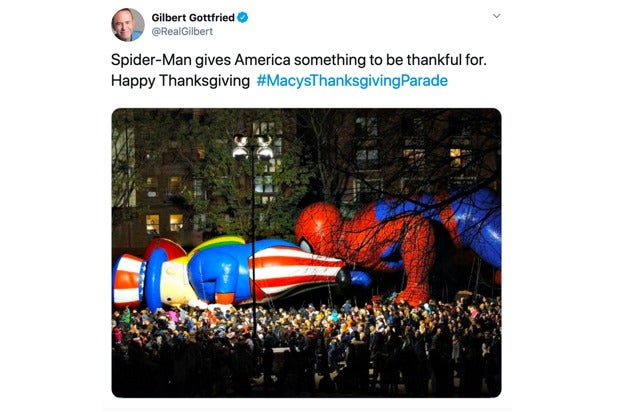 NBC
The Uncle Sam and Spiderman Incident of 2012 Who could forget this hilariously awkward and NSFC mishap from 2012? The night before the parade -- that's when they inflate the balloons and get them ready for the next day's festivities -- these two balloon pals shimmied together somehow, and Spider-Man's face accidentally got up close and personal with Uncle Sam's butt. It wasn't what it looked like -- but it did look like that. 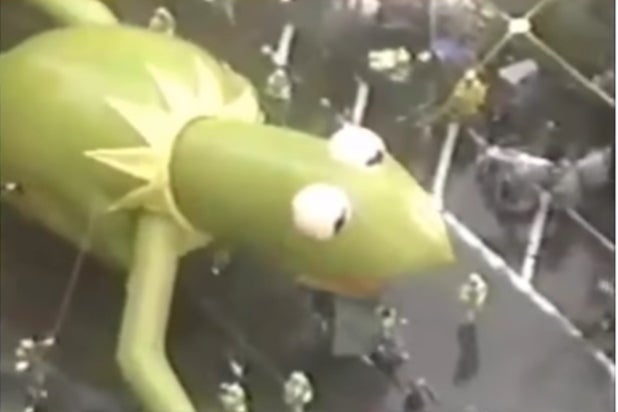 NBC
Kermit the Frog Deflates This one gives new meaning to the phrase "It's not easy being green." Hovering six stories high and 24-feet wide at his best, in 1985, the Kermit balloon suffered a rip in his belly region and began to deflate, causing him to sink down dangerously to the ground -- and the people holding onto his strings. 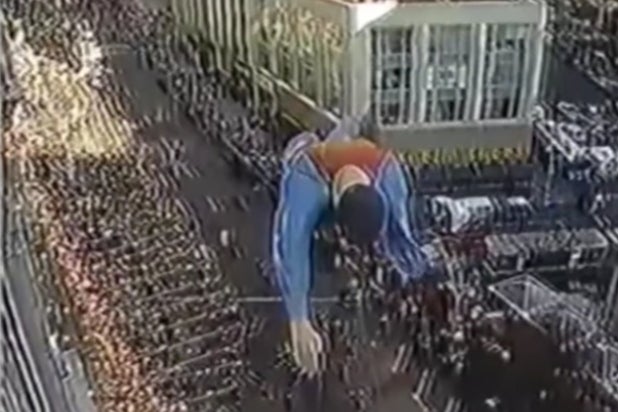 NBC
Superman's Arm Rips Off  Also in 1985, the Superman balloon suffered a loss of limb. One of the balloon's arms ripped off, causing the remainder of the severed appendage to dangle loosely, its frayed edges blowing in the wind. 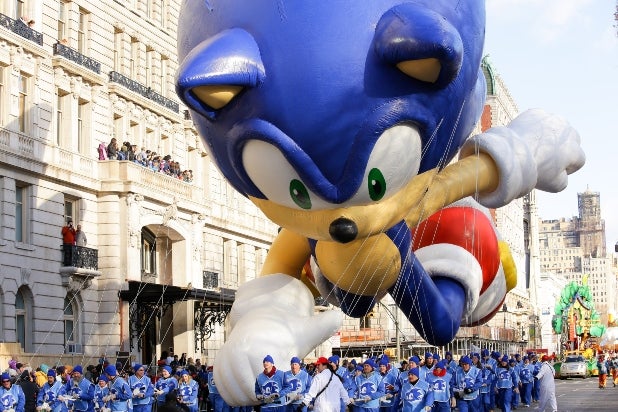 Getty
Sonic the Hedgehog Injures Off Duty Cop According to the New York Times, in 1993, the Sonic the Hedgehog balloon hit a lamp post at West 58th St. and Broadway. A piece of the lamp post fell and landed on off-duty Suffolk County police captain, Joseph D. Kistinger, breaking his shoulder. 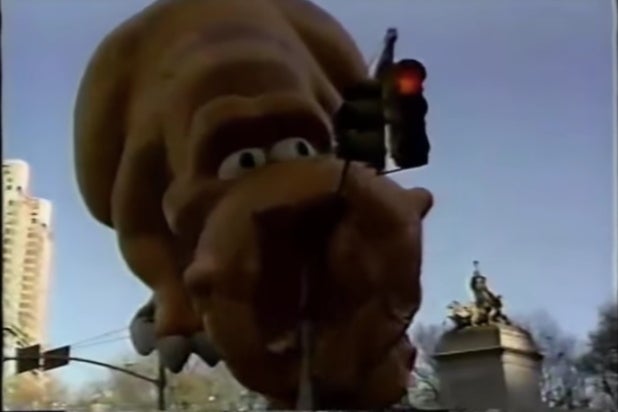 NBC
Rex the Dinosaur Pops In 1993, Rex the Dinosaur's nose caught a traffic light and ripped right open. But in case you were wondering, no, this is not Rex the Dinosaur from "Toy Story" -- he didn't make his Macy's parade debut for another two years. This Rex, who is reddish-orange color rather than green, is from the 1993 animated film "We're Back! A Dinosaur's Story." 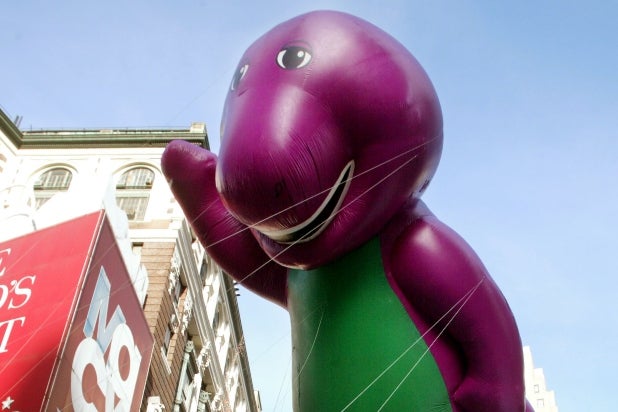 Getty
Barney's Side Rips   In 1994, Barney suffered a critical hit from a lamp post, tearing his side and deflating him. Another one bites the dust. 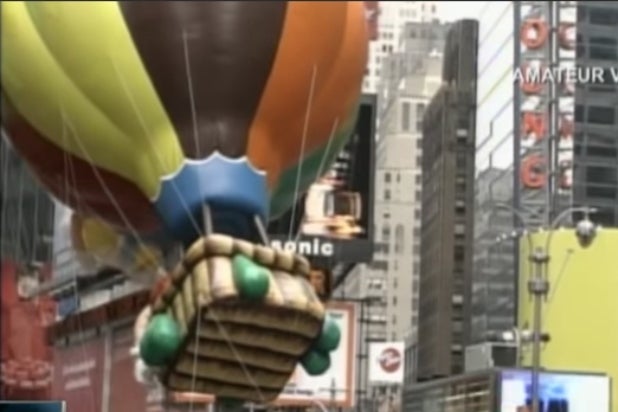 CNN
M&M Balloon Collides With Street Light, Injures Two Sisters In 2005, yet another collision occurred, this time with a street light and an M&M balloon. Parts of the street light broke and fell to earth, injuring two sisters, according to the New York Times. 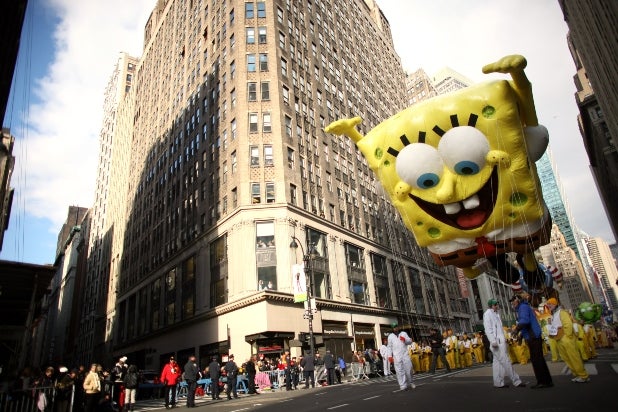 NBC
SpongeBob Gets Punctured In 2006, lamp posts once again had the last laugh when one came face-to-face with Nickelodeon's beloved under-sea dweller, SpongeBob. Though he is porous in theory, his balloon-form is sadly not immune to being punctured.
x
Looks like you're enjoying reading