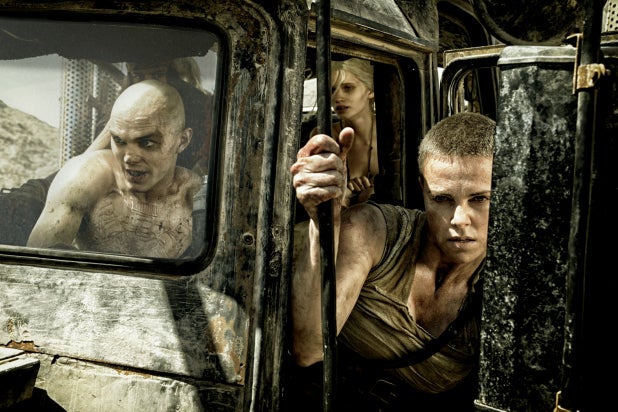 Just when we think the Hollywood sequel-reboot-retread machine has worn itself down to a useless nub, along comes a movie to remind us that, sometimes, another dip in the same well can taste just as sweet. That’s certainly the case for “Mad Max: Fury Road,” the fourth of director George Miller‘s smash-em-up derbies and the first one since 1985’s “Mad Max: Beyond Thunderdome.”

Yes, it’s been 30 years, and yes, Mel Gibson is no longer playing the titular road warrior, but Miller’s skill at this sort of grand adventure has only grown in the meantime; “Fury Road” is a breathlessly intense opera of violence and vehicular mayhem that demands both awe and multiple viewings to absorb everything that’s happening in his packed, but never overcrowded, widescreen vistas.

In the same way that the original 1979 “Mad Max” was the “Citizen Kane” of gut-bucket Australian exploitation cinema, “Mad Max: Fury Road” may well be the “Götterdämmerung” of drive-in movies. It has its roots in the Western and the post-apocalyptic road-rage action saga (which the second “Mad Max” outing, 1981’s “The Road Warrior,” helped to create), but it also feels like an epic mic-drop, where Miller dares anyone else to follow in his tire treads.

(If nothing else, this could be the movie that kills the blue-and-orange color scheme, if only because no one else is ever going to blue-and-orange as hard as “Fury Road” does. Barring, of course, a “Smurfs” sequel set in a sherbet factory.)

Tom Hardy fills Mel Gibson‘s leather jacket, with only a slight tweaking of the Max Rockatansky character; in the first “Mad Max,” our hero is sent around the bend after a group of bikers kills his wife and infant son, but this Max lost a spouse and a young daughter, and it’s that little girl who keeps appearing to a haunted, guilty Max, accusing him of failing to save his family.

Given his inner turmoil, it’s no surprise that he lets his guard down long enough to be captured by minions of Immortan Joe (Hugh Keays-Byrne, whom “Mad Max” fans will remember as the evil Toecutter). Joe rules over a citadel in the wasteland, parceling out precious water to his followers and raising a troupe of ghoulish, gung-ho adolescent males known as “War Boys,” who commit mayhem on Joe’s behalf thinking that they are living a “half-life,” and that Valhalla awaits them after their demise.

Also Read: 'Hot Pursuit' Studio Split Will Save Warner Bros. - But What About 'Mad Max'?

Both the captured Max and his car are stripped for parts (he’s tattooed on the back with his status as a universal blood donor), and his initial attempt at escape goes nowhere. But when Joe’s trusted lieutenant Imperator Furiosa (Charlize Theron) turns her mission to collect gasoline and bullets into something else entirely, Joe sends his War Boys after her, including Nux (Nicholas Hoult), who currently happens to be using a chained-up Max as his human blood bag.

What happens next is best left unspoiled, and “Mad Max: Fury Road” will benefit from first-time viewers going in knowing as little as possible. (What I just described elapses in the first ten minutes. Try not clicking on the trailer that appears below.) Suffice it to say that Miller and co-writers Brendan McCarthy and Nico Lathouris know when to thrill us and when to let us breathe, how to introduce an entire society without losing sight of individual characters, and why hope might still exist even when all seems lost.

Where “Fury Road” stands apart from so much of today’s action cinema is that the human element remains front and center; it’s one thing to watch an Avenger or one of the “Fast and Furious” drivers defy logic and gravity — not that that can’t be lots of fun — but there’s something more direct in watching people crawling on the outside of fast-moving vehicles, or worrying about getting plucked from same by one of the bad guys, that adds an additional, relatable frisson to each action sequence.

Hardy has now appeared in both of the decade’s great road pictures, although his role here couldn’t be more different than last year’s “Locke”; that film had him taking phone calls from start to finish, whereas his tormented Max barely opens his mouth, with his profound silences never diminishing his screen presence, much in the same way that Miller so often generates thrills over what we can’t see as much as over what we can.

Theron matches his performance throughout, creating an Amazonian warrior whose intensity is only increased when she makes a smoky eye reach all the way to her hairline. Theron and Hardy have one of the screen’s most powerful man-on-woman fights since “Faster, Pussycat! Kill! Kill!” and at no moment does one ever think that Theron is at a disadvantage against this worthy opponent.

(Despite the testosterone on display here, it’s girl power that fuels a great deal of “Fury Road,” with some indelible moments provided by a talented ensemble of actresses both young and more experienced. Going into more detail would mean revealing more of the plot.)

There are visuals in “Mad Max: Fury Road” that won’t soon be forgotten, from the sight of a trussed-up Hardy attached to a car like a ship’s mast to the mother of all sandstorms to the heavy-metal guitarist and drummers that accompany the War Boys into battle to the secret of how the elites in Joe’s kingdom stay so well-fed. Miller redefined action cinema with “The Road Warrior,” and it’s no stretch to suggest that “Fury Road” ups the ante on what the genre might deliver in the future.