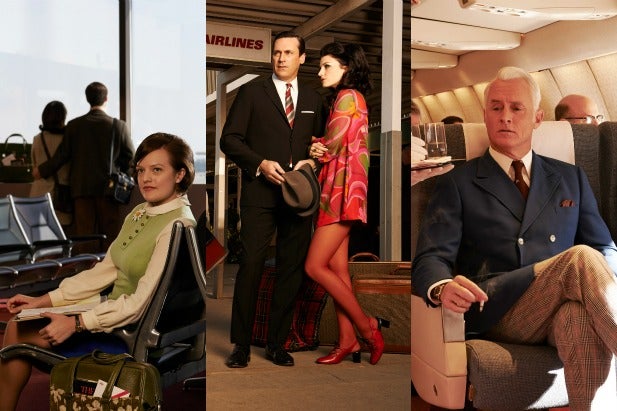 As a “Mad Men” superfan, it’s difficult to say goodbye to one of my all-time favorite shows.

I understand that splitting the final season into two parts may be the right choice financially for AMC, but creatively — it could become the unnecessarily long goodbye.

While re-watching the show from start to finish in (feverish) anticipation of the premiere, I thought about how I want it to end. I trust the writers to do an outstanding job of delivering us the soapy — yet intelligent — twists and turns that have always made “Mad Men” addictive. But more than the storylines, what I will miss the most are the characters.

Season 7 marks the last time we’ll hear Roger Sterling deliver his signature inappropriate quips, hear Don deliver a pitch, see Pete pitch a fit, watch Peggy struggle or Joan strut. Since good TV shouldn’t have happy endings or resolutions, what I’d like is for the characters to gain something that would either better them or help them resolve issues they’ve either fought against – or been beating up by — for the last 7 years.

For Don, I’d like to see him achieve something: Acceptance. This is not a man who could have ever a truly happy ending, mostly because he wouldn’t know what one looks, or feels, like. But last season, we learned that Dick Whitman and Don Draper can’t keep inhabiting the same body for much longer. Throughout the life of the series, Dick has been pitching us the biggest campaign of his career – the idea that Don Draper is a whole, real person. Now that he’s no longer convinced of his own product, it’s time for Don to accept both sides of himself – Dick and Don, New York and California, Megan and Betty. That means no more lies, no more running, no more self-medicating with women and booze.  (OK, maybe the last one can stay — but out of desire and not desperation.)

For such a career-driven woman like Peggy, I’d like to her achieve balance. Always the overeager helper with bad timing, Peggy’s finally come into her own.  Unfortunately, it involved the stabbing of a potential husband and an unfortunate plaid pantsuit — but now her ambition and circumstances have caught up to each other. Her success always comes at the expense of her personal life, where men decide that she’s not worthy of them or pretend that they are not worthy of her. Peggy needs to find a true partner, one who can appreciate the modern woman helping shape the world around her instead of tearing those efforts down.

As for Roger, he should finish the show’s run caring about someone other than himself. While I don’t think Roger’s as shallow as he seems or thinks he is, he’s also never really been challenged to rise above himself. Everything’s come so easy for him, whether love or money, and he’s always disappointed when every victory turns out to be fleeting. I’d like to see Roger be pushed outside the confines of his heart and mind, not by LSD or a hot 18 year old, but by someone who needs him to be best version of himself.

I’d like Joan to experience power. Rising from the ashes of a disastrous marriage and a difficult workplace decision that still haunts her, Joan has proven herself to be a secret feminist — by action, not principle. I’d like to finally see her come into her own – and get recognized for her brains, not just her beauty. And of course, Joan needs to end up with a man truly deserving of her.

Surprisingly, Pete has turned out, in a crowded landscape, to be one of the show’s most complex characters. A son of privilege, he’s nonetheless as unwanted and lost as Dick Whitman. Over the show’s run, his bravado has receded along with his hairline, as this once rising star finds himself constantly feeling like a failure in a world that’s cooler, better looking and more successful. I’d like Pete to find himself, which should be pretty fun in the 1970s.

For perfect Betty, I wish that she accepted life, people and herself — along with all the flaws, imperfections and ugliness that make living worthwhile. Having been taught by her mother that when “you’re painting a masterpiece, don’t let anyone see the brushstrokes,” this is a time in America when it’s all brushstrokes. No one needs a soaking Woodstock mud bath as much as Betty.

Sally, the child of spectacular dysfunction, continues to grow up in a world that’s only going to get more confusing. I hope that she, like America, finds a way out. Maybe she’ll end up in an ashram or in the executive suite but, unlike Betty, she has more to offer and more to chose from.

While the show will always live on in my iTunes, enabling me to join SC&P whenever I want, the characters will remain frozen in time while we move on, secretly wishing for one last perfect pitch.