Greta Gerwig isn’t exactly a movie star, but she’s an auteur. Her characters aren’t all the same, but they’re close enough to inhabit the same emotional zip code: young, over-intellectual women struggling with self-definition and the direction of their lives. Rebecca Miller directed “Maggie’s Plan,” adapting an unpublished novel by Karen Rinaldi, but the film is so reminiscent of movies like “Frances Ha” and “Mistress America” that it’s hard to believe Gerwig didn’t write the script herself.

If you’ve loved Miller’s past films, like “Personal Velocity” and “The Ballad of Jack and Rose,” the featherweight, sometimes forcibly quirky tone of “Maggie’s Plan” comes as a pronounced departure, and not necessarily a welcome one. Stuffed with gags about self-aggrandizing academics and artisanal pickle entrepreneurs, the movie aims lower than Miller’s earlier work, and if it mostly hits its targets, that’s in part because they’re awfully broad. Like any artist, Miller has the right to reinvent herself, but we don’t need one more director of winsome, Sundance-ready rom-coms.

That said, as winsome, Sundance-ready rom-coms go, “Maggie’s Plan” is a pretty winning one. Taking its cue from Gerwig’s irrepressible ebullience, the film moves at a brisk clip, spanning several years in the course of just over an hour and a half and cramming a lot into that brief span. There’s Maggie (Gerwig), a career advisor for college students who has decided not to let her inability to find a stable romantic partner keep her from having a child; garrulous academic John (Ethan Hawke), who specializes in something called “ficto-critical anthropology”; his wife, Georgette (Julianne Moore), a fellow anthropologist of greater renown, with an ego to match; and a supporting cast of assorted outer-borough bourgeois that expands Maggie’s plight into a cultural cross-section. Like John’s chosen discipline, the movie mixes sociology with storytelling, although it’s worth noting the cast is about as diverse as an early season of “Girls.” 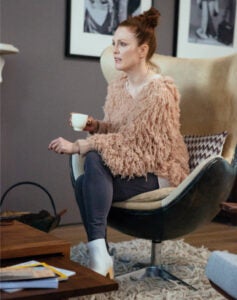 Maggie initially settles on a shy, shaggy pickle maker (Travis Fimmel) to be her sperm donor of choice, but a request to read John’s unfinished novel leads to an extramarital affair, making her carefully laid-out plan go quickly awry. Before long, John has left Georgette, and he and Maggie are raising a child, although he’s still giving his vain, needy ex-wife more attention than his current partner. Although she thinks of herself as a rational, organized person, Maggie has a habit of surrounding herself with fragile narcissists whose gratitude she mistakes for appreciation.

Soon, her relationship with John becomes troubled as well, although for the opposite reason that his marriage to Georgette foundered. Every relationship, he tells her, has a gardener and a rose, a party who needs to be cared for and one who does the caring. He was Georgette’s gardener and Maggie is his, leaving open the question of who will tend to her rosebushes.

Like Gerwig, Hawke is riffing on a character he has played a dozen times before: a smug would-be novelist with a thing for blondes. (Maybe they should have called it “Before Midday.”) But Moore is farther out than she’s been since “The Big Lebowski,” adopting a thick, unplaceable accent — purportedly Danish, but closer to Madeline Kahn in “Blazing Saddles.”

The movie presents Georgette at first as a caricatured ego-monster, pursuing her career as her husband teaches part time and looks after their children, but in its later stages, we see her as a more three-dimensional character — less the nagging wife of the man Maggie’s in love with, more a fellow victim of his self-loathing manipulation, and eventually a clandestine collaborator.

Full of quotable lines and nifty observations, “Maggie’s Plan” is cumulatively nearly too cute for words: A good litmus test for its tolerability is whether you find the idea of Kathleen Hanna covering Bruce Springsteen in a Québecois accent irresistible or insufferable. But there’s some tartness mixed in with the sweet, particularly with regard to how easily (or especially) self-identified progressives can fall into old-fashioned gender roles without realizing it, then develop elaborate intellectual rationalizations to justify the status quo.

Given how familiar “Maggie’s Plan” seems, the movie itself could be accused of doing the same, slapping a veneer of intellectual wit over a tired and trite skeleton. But when a movie’s superficial pleasures are this acute, you don’t need to look below the surface.