Suro will be responsible for overseeing new and current programming for cable networks outside the NBCU organization, as well as managing development and production of ancillary programming related to all series.

Suro also held positions at Francis Ford Coppola’s Zoetrope Television, where she developed and executived produced the USA original series "The 4400," as well as UPN and CBS.

At MTV Networks, she launched scripted pilots including MTV’s “The Hard Times of RJ Berger” and supervised development and production of reality projects including “Is She Really Going Out With Him”  and Jamie Foxx’s “From Gs to Gents.”

Concurrently, Christina Sanagustin (left) has been promoted to the post of senior VP, development and current programming; Tom Lieber has been named director, 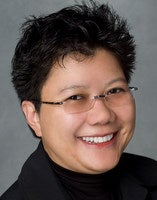 “We’re thrilled that Chris, Tom and Korin are taking on bigger roles on the team,” Stern said in a statement. “Their strong creative and visionary skills have been key factors in firmly establishing the studio’s first year in the world of production.”

Sanagustin joined Syfy (then Sci Fi) in 2007 as vice president of development, where she oversaw the launch and premiere season of "Sanctuary." Moving to UCP in October of 2008, she contributed to the development of the series "Eureka" and "Battlestar Galactica: The Plan." She also developed "Warehouse 13" and "Caprica."

Lieber is credited with spearheading the studio’s efforts on the final season of "BSG," "BSG: The Plan" and new series "Caprica." He joined UCP from Universal Media Studios where he served as a manager.

Huggins joined NBCU in July 2008 as a development coordinator for NBC and quickly joined the entertainment associates program.She  worked under Sanagustin and Richard Rothstein at UCP, managing the development and production of projects such as Syfy’s "Eureka."