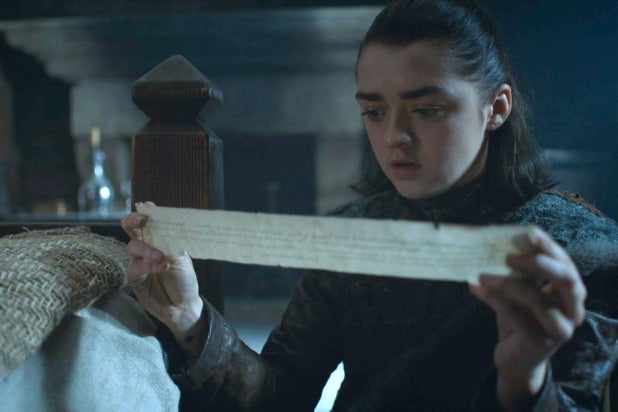 Maisie Williams is done playing the girl with no name, having wrapped her role as the “Game of Thrones” vicious teen assassin, Arya Stark, back in July. Though she teased her final bow with a picture when she was done, Williams has now given some solid hints about how her face-shifting character might go out when the show’s eighth and final season airs next year — and it’s pretty sweet, if not lonely.

Williams told The Guardian in an interview published Wednesday that her last “Game of Thrones” shoot was “beautiful,” and she “ended on the perfect scene.” However, spoiler alert, the actress said it was nothing out of the ordinary in terms of who she was acting with — which was nobody.

“I was alone – shocker!” Williams said. “Arya’s always bloody alone. But I was alone and I had watched a lot of other people wrap. I knew the drill, I had seen the tears and heard the speeches.”

Readers should keep in mind that, like most shows, “Game of Thrones” is filmed out of order for the most part — so just because this was Williams’ final scene, doesn’t mean it will be the last you’ll see of Arya on screen. But it could be.

The 21-year-old is far from the first “GoT” star to discuss her last day on the set of the D.B. Weiss and David Benioff-created series — she’s also far from the first star to be peppered with questions about the eighth and final season.

So far everyone has been pretty tight-lipped, but you can read what Peter Dinklage, Nikolaj Coster-Waldau had to say about the fates of their characters and the series as a whole, here and here and here.

“Game of Thrones” final season premieres in the first half of 2019 on HBO.