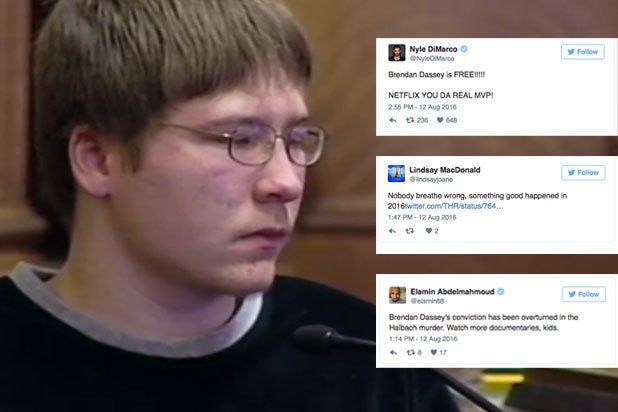 Social media was ablaze Friday after a federal judge overturned Brendan Dassey’s conviction for involvement in the murder of Teresa Halbach.

The bombshell was dropped less than a year after Netflix’s “Making a Murderer” documentary series cast a light on what it suggests was a shady investigation by Wisconsin police into Halbach’s murder. Dassey’s conviction came in 2007.

Given what a cultural event “Making a Murderer” was, Dassey became a celebrity of sorts, particularly because the teenager’s shy and soft-spoken demeanor endeared him to viewers, making him appear more of a victim of the police and prosecutor’s alleged shenanigans than was Steven Avery, the main subject of the documentary. And, indeed, the judge overturned Dassey’s conviction on the basis that his confession to having participated in the murder was involuntary and coerced.

Many of the reactions on Twitter have been related to Wrestlemania — Dassey said he was upset about going to prison because he didn’t want to miss the yearly pro-wrestling event. We also saw triumphant fist pumps about justice being served and Netflix’s part in it, topical humor about totally unrelated things and light joking about Dassey’s tendency on “Making a Murderer” to respond to questioning with a simple “yeah.”

If Vince McMahon doesn't have the business sense to get Dassey front and center at Wrestlemania, there's no helping him.

WRESTLEMANIA 33 IS WAITING FOR YOU BRENDAN DASSEY

Finally …Brendan Dassey can watch that Wrestlemania he was trying to get back for. #TiVobetternothavedeletedit

Once Brendan Dassey watches Wrestlemania 32 he’ll wish he was back in prison.

Nobody breathe wrong, something good happened in 2016https://t.co/5UBSsxtRz5

.@realDonaldTrump For the record, Brendan Dassey has an alibi for when ISIS was founded.

Well, I guess Brendan Dassey can finally go back to school and turn that project in. #MakingTheMurderer

Hope Solo furious Brendan Dassey has been released. Claims he was a coward to confess in the first place. #MakingAMurderer #hope #Rio2016

REPORTER: brendan, what's the first thing you're going to do now that you're free
BRENDAN DASSEY: yeah