You may not be able to hop on a plane to Paris Fashion Week anytime in the foreseeable future, but Amazon’s new series “Making the Cut” aims to provide that same experience from the comfort of self-quarantine.

The series from “Project Runway” alums Heidi Klum, Tim Gunn and executive producer Sara Rea puts a global spin on the fashion design show format, whisking the contestants off to Paris in the first episode for a fashion show under the glow of the Eiffel Tower. Later episodes see the designers freely wandering through a pre-pandemic Tokyo in search of inspiration.

“We wanted to take them to fashion capitals, emerging capitals, and give them sort of the best of the best,” said Rea, who worked with Gunn and Klum for years on “Project Runway” and joined the duo when they decided to leave for a new project at Amazon. “So we went and we asked for the moon,” she said. “And they gave it to us … We got a lot, a lot of yeses. We were, to be honest, we were a little shocked.”

Also Read: Heidi Klum and Tim Gunn Are Back - and Doing a Weird Dance - in Amazon's 'Making the Cut' Trailer (Video)

Watching the designers zip through the streets of Paris and put on elaborate fashion shows for large crowds can feel like watching something from another universe in the age of social distancing, but Rea hopes the show can provide a welcome distraction for those who need it.

“The way I see it is that if we can give someone an escape for an hour or two and a little bit of a fantasy and a moment not to think about all the madness, then that’s rewarding. And that makes me happy,” she said.

As a nod to the current crisis, “Making the Cut” announced ahead of its premiere on Friday that the show would donate $600,000 to the World Health Organization and local charities in New York, Paris and Tokyo, where the series was filmed. Gunn and Klum also launched a social media challenge called #StrutForTheCut in an attempt to raise awareness for the effort.

Read the full interview with Rea below. 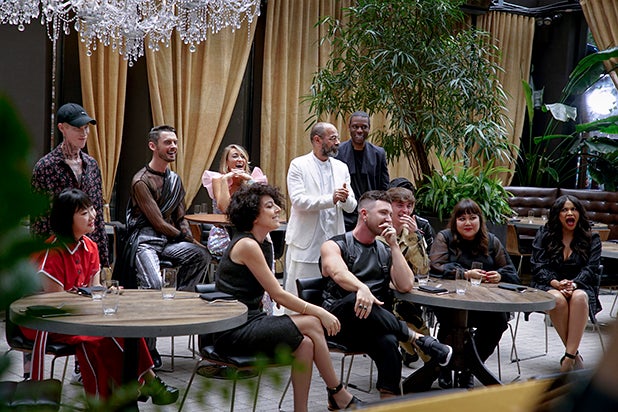 Can you take us back to those early conversations with Amazon and what you guys were looking to do with the show?

Right when it all started, Heidi, Tim and I, it was important for us to really look at where fashion is now and how we reflect that in the show. And how do we come out of this with a designer who’s really capable of building a brand, and really being successful because that historically was not what was happening — with the exception of Christian Siriano. So we went to Amazon and we talked to them about that. They loved that idea. And then we wanted to also really make the fashion shows big events because that’s where fashion shows are now. They’re not all walking a runway. Usually, they’re events, there’s a theme and there’s just more to it, so we wanted to reflect that on the show. And after years of the designers sort of being stuck in a box, we really wanted to give them as much inspiration as possible, so there’s the travel element. We wanted to take them to fashion capitals, emerging capitals, and give them sort of the best of the best. From inspiration to the people that could join us on the show, and just to be in some of the most fashionable places in the world. So we went and we asked for the moon. And they gave it to us. They were so excited by it and inspired by how global it was and the fact that it really does reflect the current state of fashion. We got a lot, a lot of yeses. We were — to be honest — we were a little shocked.

We see a lot of Paris in that first episode. Not only the fashion show at the Eiffel Tower but throughout the entire episode. How did you go about incorporating the location into the show and making sure that it all kind of fits together?

That was really important. We’re going to go to a city, and we wanted to embrace it. We wanted to give the chance to be really immersed in that city and, like I said, embrace the city and as much as we could about that location. And we did want to incorporate those travel elements you’ve seen in other shows but that haven’t been done in fashion. We really did want the city to be a part of the character. Especially in a city like Paris, which is so fashion relevant and beautiful and inspiring. The same for Tokyo. We really wanted to immerse the designers and the viewer in that — show the culture and the life in that city. 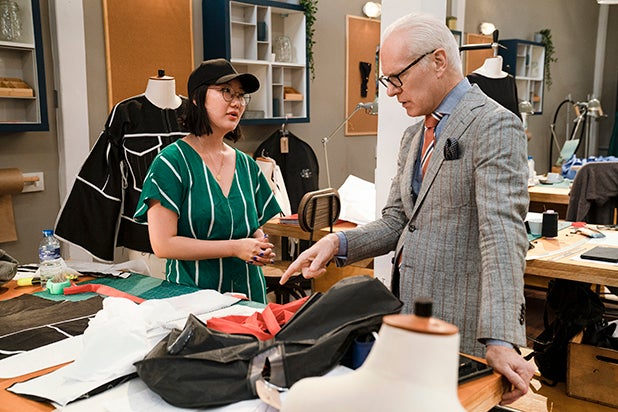 The core structure of the show is pretty similar to what we’ve seen from reality competition shows in the past. How did you go about deciding where you wanted to keep these more kind of traditional elements and where you wanted to do something different?

One thing that we really wanted to do to make it different was to not, you know, herd the designers in and out. Like, on most competition shows you’ll see the contestants sort of all move as a pack and do the same thing, and we didn’t want to completely up-end what we knew worked, but we also wanted something different. So that’s why you see the designers have a lot of freedom. It’s sort of meant to have a bit of a more docu feel in the first half of the show. It’s like, here’s where your fashion show is, here’s when your fashion show is, we’ll see you there. And yeah, Tim checks in with them and they’re in the workspace, but they get to come and go as they please. It gives a show a different feel because there’s a lot of freedom. We get to see how they navigate every day versus, you start at this time and you end at this time, this is where you have to be. This was when just giving them the freedom to do what they needed to do. Oh, they need more fabric? They can go back. They want to spend all day at the fabric store? They can do that. So those were elements that we did want to be different because we wanted a little bit more of that documentary element in that first half of the show.

I imagine that created some interesting logistical challenges.

Yeah. No, production didn’t love the idea, but I was like, this is important to us. We really want to make sure that this doesn’t feel like everyone is being babied. So yeah, logistically it was a nightmare because we had people all over Paris, and people all over Tokyo. It’s just a lot harder to do. 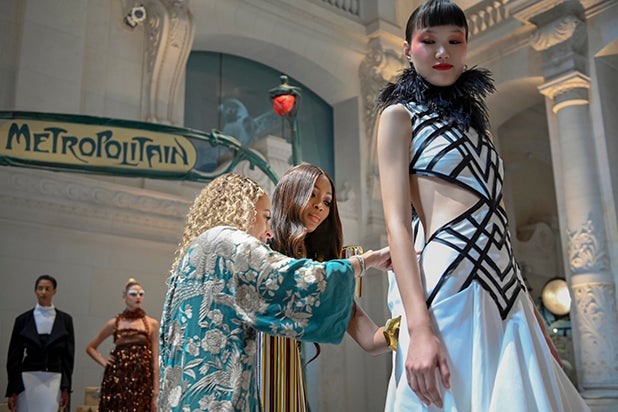 Another big component in the episode is how they work with seamstresses on their garments. Why did it feel important to give them that opportunity?

It really goes back to that’s what’s happening in the real world. You know, some of these designers haven’t sewn in 15 years, so we want to just give them a little bit of support. So we’re interested in seeing how they communicate and manage that, but also because that’s how the real world works. So Tim’s advice was for the designers to do as much as they could and have the seamstresses sort of handle the basics, the buttonholes, etc. We didn’t want it to be a sewing competition. We really wanted the design element to shine.

How did you approach casting the show? A lot of these designers are already more established. Did that make the process more difficult?

It’s always a balance but, yeah, it was hard. It was hard, but it wasn’t insurmountable because a lot of these people with brands are more visible. We got all the standard applicants, but we did have to raise the bar. Our cutoff was at a different place as far as how successful they’ve been and their aesthetic. We did a lot of searching on Instagram and fashion websites and fashion magazines and things like that. It was hard but we also saw that, because of the platform and the format of the show, we had people willing to be a part of this show that probably wouldn’t have done other shows. 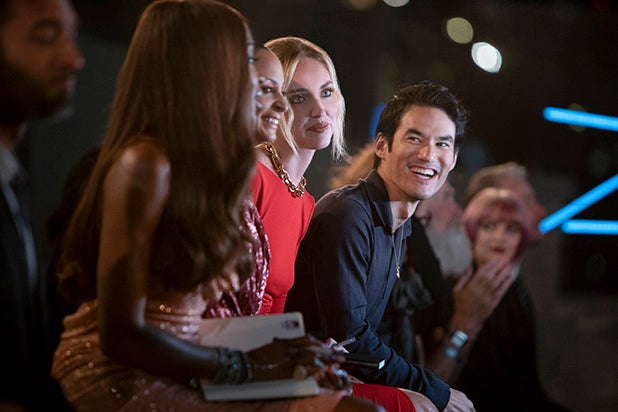 What were the kinds of things you were looking for? When you’re thinking about someone who already has a brand, how established was too established?

It wasn’t a hard and fast rule, but we wanted to make sure they were hungry enough because we wanted to make sure everybody really wanted it and this was their dream. This wasn’t a hobby, this wasn’t a side business. This was their heart and soul. So it was really, if we look at an applicant and say, does this person have what we’re looking for? Hunger and passion and drive is a huge part of that.

Also Read: Even Heidi Klum Can't Get a Coronavirus Test Despite Being Home Sick and 'Feverish'

What is it about Heidi and Tim that makes them such a compelling duo for a show like this?

I think at the core, they’re just relatable and likable people. They’re sort of fashion’s odd couple because they’re just so different. Everything they do becomes some sort of comedy. And I’ll tell you the truth, we just let them do what they want to do. You want to go to the Moulin Rouge, OK, let’s go do it. Or Tim really wanted to take Heidi fencing, and so they go and they do that, and we just roll on it. So it’s just who they are and how their relationship works. But so much fun. It’s the same off-camera. They’re so different on the surface, but at their core, they both have these huge hearts. They don’t take themselves too seriously. They like to have fun. So they have so many similarities about the things that really matter.

Does it feel strange to be debuting a show like this, where travel is such a big component, during a moment when everybody’s sort of locked indoors?

I mean, I guess it depends on how you look at it, right? The way I see it is that if we can give someone an escape for an hour or two and a little bit of a fantasy and a moment not to think about all the madness, then that’s rewarding. And that makes me happy. So I haven’t thought about it as being odd so much as I’m hopeful that people can escape for a minute. 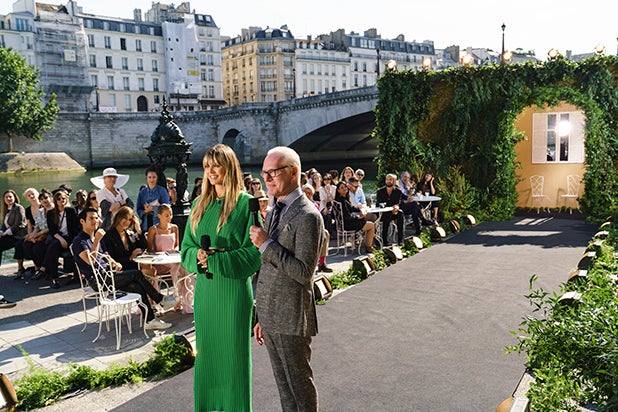 “Making the Cut” will roll out two new episodes each Friday on Amazon Prime Video.