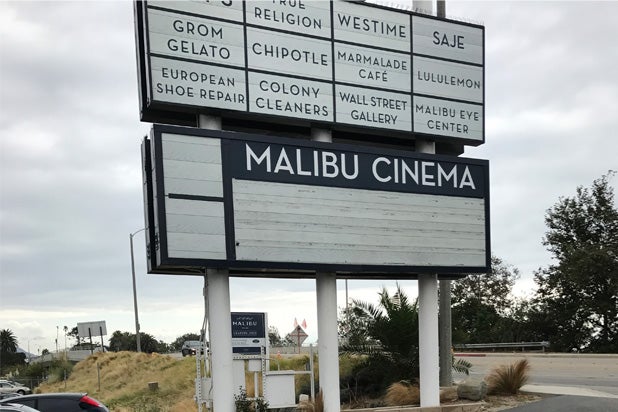 As we know, the movie industry had a disappointing summer — the worst in more than a decade.

So filling those movie theaters is more important than ever. At the very least, they need to stay open. Between 1997 and 2016, the number of U.S. cinema sites dropped from 7,480 to 5,821, according to data from the National Association of Theater Owners.

One of the latest to close is 45-year-old Malibu Cinema, the lone theater in the famous beach community. The Regal chain decided “the current model was not viable” and shut it down on September 10. It now sits vacant with no plan in sight.

While we are not expecting a whole lot of sympathy for residents, the closure spurred outrage and sadness. “It was a great place to hide and take refuge in your own private world,” said long time Malibu-ite and Oscar-winning writer Eric Roth. “And it was a place for kids to go, as well as locals that have been here for years.”

Also Read: How Angie Dickinson and Candice Bergen Shook Up Women's Roles on TV - and Off (Guest Blog)

There is some irony here, when one recalls how the town’s starry reputation began.

When many think of Malibu, they think of “the Colony.” One mile long, comprised of about 100 houses, it was originally called the Malibu Movie Colony. In the 1920s, when Malibu was nothing but almost impassable dirt roads, the strip consisted of shack-like cottages built by Hollywood set designers.

These were rented by dazzling names like Gloria Swanson, Clara Bow, F. Scott Fitzgerald and more, who needed hidden escapes for their often illicit goings-on. Over the years, of course, the shacks became bigger and bigger, while the stars remained large: Bing Crosby, Gary Cooper, Merle Oberon, Elizabeth Taylor and Richard Burton and countless more spent time in the Colony.

Lee Marvin was occasionally found sleeping on top of his car, Dave Chasen tried out a chili dish at Frank Capra’s house (which later became Tom Hanks’) and thus was born one of Hollywood’s legendary dishes. Cary Grant rented his own place down the road from Dyan Cannon after they split just so he could watch their daughter go off to school. Larry Hagman (who sold his house to Sting) famously led parades on the beach and grew marijuana, which delighted the Colony kids.

A lot of creativity was hatched over the years. Robert Redford saw a covered-up Mary Tyler Moore walking by herself, and got the idea to cast her in “Ordinary People.” Cat Stevens was visiting record mogul Jerry Moss when he was caught in the ocean currents. He pledged that if he survived, he would change his name and devote his music and life to Islam. Philip Kaufman wrote “The Right Stuff,” and Eric Roth penned “Forrest Gump.”

The music industry virtually took over the Colony in the late ’60s and ’70s. Linda Ronstadt was a regular, Neil Diamond owned for many years, Jane Fonda’s memorable bash concluded with the Byrds playing on the deck as the sun rose. Later, the studio moguls arrived, folks like Joe Rothand Jonathan Dolgen. Peter Guber’s all-Japanese home was built when he was at Sony. Jon Peters and Barbra Streisand rented close by.

Then came the techies: This past summer, Google founders Larry Page and Sergey Brin rented homes. Now the Colony is a quieter, less friendly place. Even the homes on the “wrong side” (meaning not on the ocean) qualify as mansions and fewer and fewer people reside full time.

Up the road is Broad Beach — also home to Hollywood heavyweights — and just south of the Colony is Carbon Beach, which continues to boast wealthy names and numbers. Yes, many have their own screening rooms or wouldn’t venture to a small two-screen venue.

But they have a stake in hoping “regular” folks will continue to taste their goods. Why wouldn’t Tom Hanks and Steven Spielberg merge for yet another project: saving the town theater? Or George Clooney and his buddy and partner Rande Gerber (who owns the Café Habana restaurant just across the street.) Hey, they scored a deal worth up to $1 billion for a tequila, so how much would managing a little movie theater cost?

This, in fact, is happening in another town on the other coast that also combines long time (un-glitzy) locals with wealthy literati. On Long Island’s Sag Harbor, a nonprofit organization led by artist April Gornik has raising money to buy and restore its beloved movie theater.

There is no doubt that more sympathy should be saved for towns that are not filled with wealthy people who are invited to, or host, their own screenings. But it does seem like it would be a nice message if Hollywood — including those making the movies people are not seeing — stepped up and saved one of its own.