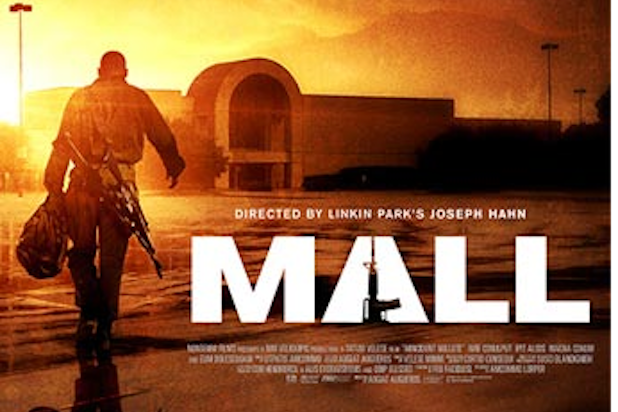 Brad Pitt, Kristen Stewart and Channing Tatum might have new movies opening this weekend but if you like your entertainment a little edgier, Paragon Pictures is releasing “Mall,” based on the debut novel of celebrated playwright Eric Bogosian.

The well-made indie movie follows five characters whose paths cross over the course of one fateful evening in a shopping mall that has come under siege from an armed lunatic.

D’Onofrio and his fellow producer, Sam Maydew of Silver Linings Entertainment, spoke with TheWrap in advance of the movie’s release about a range of topics, including America’s obsession with violence, the danger of people-watching at the mall and why Linkin Park’s decision to contribute original music was instrumental in securing financing for the film.

So Vincent, I know you worked with Eric Bogosian on “Law & Order: Criminal Intent,” but how did you first get involved with “Mall”?
Vincent D’Onofrio: I had a copy of the book. I guess I read it back when he wrote it. Eric did the TV show with me for a while and he did a part in my movie “Don’t Go in the Woods.” We do things for each other. He asked me, ‘What would you think about writing a script?’ Now, I’ve seen very few films in my life about multiple stories going on [at once]. I always liked them but they never work very well, and that’s the trick, so that was the biggest task with “Mall” — to completely switch the point of view. Once I figured that out, I got together with my co-writers, Sam Bisbee and Joe Vinciguerra.

And how did you become involved, Sam?
Sam Maydew: I was working with Joe, who I’d started working with a long time ago. Vincent and I originally knew each other in passing but we started working together a few years back, so when he gave me the script and I loved it, I said, “I don’t see how it can’t get made.”

So how did you know that Joe Hahn was the right guy for this project, given that he’d never directed a feature before?
Maydew: Vincent took a leap of faith with Joe. Eric Bogosian is no slouch and they’re friends, so for me to go to Vincent with a first-time director who’s part of a band … I took him to a concert and he really loved it and connected with Joe. That’s when I started thinking, we can get this movie made.

D’Onofrio: I had only known Linkin Park through my nephew, who introduced me to some of their songs. I didn’t really know what they were all about, so I had to educate myself. I met with Joe a couple of times and the thing I like most about him is, he’s very honest and expressive about how he feels about things when it comes to art. The film is not about a guy with a gun, it’s a comment on social violence — of all kinds — not just mall shootings. It’s about how we treat ourselves and how we treat each other. I knew it needed an artist to open it up and I knew Joe would bring something unique to it.

Vincent, what was the hardest part of adapting this challenging material? And Sam, as a producer, how did you go about pulling this project together and finding financing for it?
D’Onofrio: The big challenge was to keep it from Jeff’s point of view. When he’s talking about the people in the mall who he watches every day, it’s his perception of these people. It could be these people’s real lives but then we take it a little further and slide into that question of what might be real and what is just Jeff’s point of view.

Maydew: We looked under every rock and tried to utilize the resources that we had. Part of it, frankly, was financed because Linkin Park was involved. We were able to find people who believed in the power of their reach and the fact they have an audience. If you’ve built an audience and they’re aware of your project and it’s worthy, then they’ll watch it. So a good chunk of the financing was a result of Linkin Park’s involvement. And then of course, there’s a piece with traditional investors who believe in the project and an international piece, which was enhanced as well by the Linkin Park connection, especially once they agreed to be involved in the music. It’s one thing to have Joe directing and it’s another for him and his bandmates to do something that people revere them for.

D’Onofrio: It was a perfect match. You’ve gotta put it in that context. It was the perfect match for Joe and for Linkin Park. Their audience — most could’ve been a character in this. They’re the right age. All the kids listen to them. So the match was incredibly lucky and just a gift.

Did you always intend to co-star in the film, Vincent? And was it tricky filming that scene in the car where you’re handcuffed and being seduced by a teenager?
D’Onofrio: When we were writing, I didn’t have my eye on it. But I ended up playing Danny and I enjoyed playing him. We also wanted Eric to play the tuxedo guy [the gunman’s former boss] but he couldn’t do it. We lucked out with Peter Stormare. Meanwhile, Sam had turned me onto that actress, India Menuez, so I invited her over and sat with her for a while. We talked on my front stoop and I told Sam we should cast her. I asked her if she was going to be OK with that scene and she looked at me in this young professional way and was like, “Yeah, of course.” We talked about how far she should go. I know how to communicate with actors and there was a good trust between us. And then after, when we felt comfortable with each other, we didn’t talk about it all. We just showed up and did our thing.

What’s your take on how the film deals with violence, especially in lieu of what’s going on in the world today and recent mass shootings that have occurred in this country?
D’Onofrio: It’s the same old answer. It depends on the context and what form the violence is being presented. If it’s trying to glorify the violence or give some kind of excuse for it, then there’s an issue. If it’s entertaining enough, it’s up to the audience. It’s not for me to judge. But there’s clearly a difference between films that exploit violence and films where violence is part of the storyline. Everyone on this film “Mall” felt the same way — that our film was more of a social comment on violence. We’re saying there is a lot of violence, but maybe we should cool out and not be so tough on ourselves. Maybe the guy with the gun is a coward and he’s not so scary. It’s an issue that goes on in our country.

The way Gina’s character treats herself — looking at herself in the mirror and not seeing her beauty and focusing on her flaws. She’s eating and sleeping around, just talking it out on herself. My character behaving so badly is about how he’s become obsessed with women as objects, until he winds up being treated exactly like what he is. He’s someone behaving really badly and he gets called out for it. Or this kid who’s living on the fringe of life, like Mal, who isn’t responsible for anything and his mother enables him. Any money that he has, he spends on drugs. He’s not doing anything with his life at a crucial age and he’s blaming everybody but himself. He chooses to take it out on the world. And Jeff, who could be taking the same path as everyone else but there’s something about him that tells him there’s more, and it’s not sex or drugs or power or perversion. That’s not just what life is about. It’s about being open and reading and exploring and watching what goes on in the world, not following people down into degradation. He’s our hope.

Maydew: This conversation — that’s what inspired me. I was raised in Bellevue, Wash., and I remember as a kid when they turned the outdoor mall into an indoor Taj Mahal, and the Bellevue Mall was like going to Disneyland. I didn’t understand it until I got older, but people would talk about how fun it was to people-watch, and as I got older I understood that people-watching is about people who are hurting and trying to escape. The way they’ve created The Grove and you see people there filling up time in the afternoon because they don’t have anything better to do, or a more original way to spend time with their family. Plus, this idea that violence in America comes in different ways. It’s defined in different ways and the irony is that this book was written years ago, and right after we shot this movie, all these shootings start happening. People go to that place about shootings, whether it’s a school or a mall or a movie theater, but it has nothing to do with that. The pain, like Mal’s pain, has been going on for some time. I mean, the movie starts with him walking out of a room and shooting his mother. It really is a bit of an expose on how people need to live in the moment more and figure out how to make themselves happy rather than escaping. I mean, the idea that people go and people-watch at the mall is amazing to me.

“Mall” storms into select theaters on Oct. 17. Watch the trailer below.