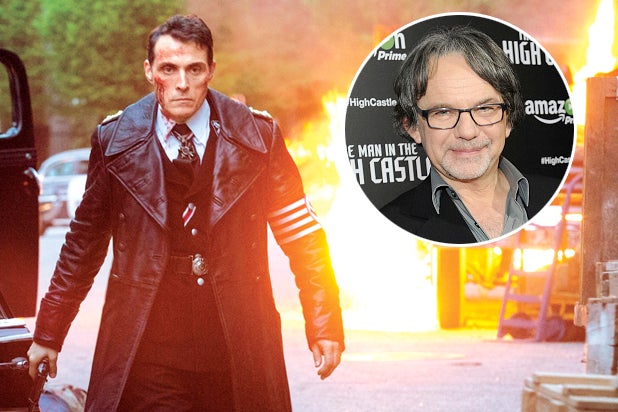 Amazon’s new drama “The Man in the High Castle,” based on the novel by Philip K. Dick, imagines a world in which Germany and Japan won World War II and split the U.S. down the middle. In October the New York Times on Twitter asked readers to imagine whether they, with the power of time travel, would kill baby Hitler — a question that has this week been mulled by everyone from Ben Carson (no) to Jeb Bush (yes) to Stephen Colbert (no).

So how does “High Castle” executive producer and showrunner Frank Spotnitz come down on the baby Hitler question?

“I don’t know if I can answer the question definitively, but I will say this,” Spotnitz told TheWrap: “it does touch on a very Philip K. Dick theme, which is, ‘Is character inevitable?’ Was it inevitable that Hitler would grow up to be a monster that wreaked havoc and untold suffering on Western civilization? Was that inevitable, or was there another path his life could have taken?”

Also Read: Jeb Bush Would Travel Back in Time to Kill Baby Hitler

After GOP presidential candidate Bush responded Monday to the baby Hitler question with an enthusiastic, “Hell yeah I would!” Colbert said Tuesday on CBS’ “Late Show” that he would, instead of killing baby Hitler, take him away from his parents “and raise him with love.”

Bush’s fellow Republican candidate Carson, a medical doctor, Wednesday told reporters that he would not abort the fetus Führer. “I’m not in favor of aborting anybody,” Carson said.

Spotnitz is more philosophical about the question, tying it back to his work on “High Castle.”

“If you could look at yourself in an infinite number of universes, would you take the same path in every one of those universes?” Spotnitz asked. “I think the answer is some people would be remarkably consistent. Many others would depend on randomness, the randomness of life, which is a really unsettling thought. So I don’t know whether it’s inevitable that baby Hitler grows up to be a mass murderer and a madman.”

Nazis and hypothetical fates are two things that Spotnitz has been thinking about a lot lately. In “High Castle,” Nazi Germany under an aging Hitler rules the Eastern United States to the Rocky Mountains, while imperial Japan reigns over the West Coast.

With New York being one of the show’s principal locations, Nazi imagery abounds. Given that much of that imagery is still associated with hate groups today — a swastika drawn on a bathroom wall in human feces was one of the incidents that sparked recent student protests at the University of Missouri — Spotnitz wants to be cautious about employing it in the show, while remaining truthful.

“The Man in the High Castle” premieres Nov. 20 on Amazon.