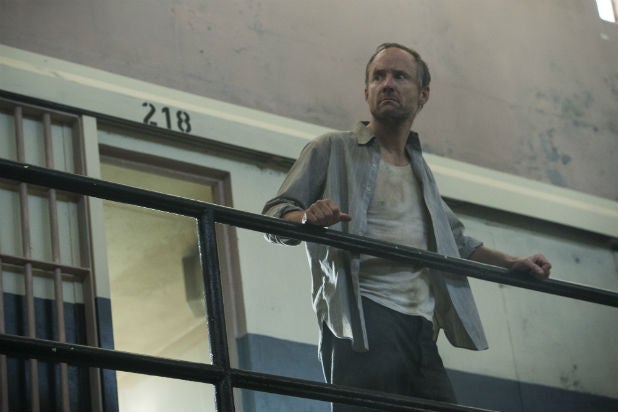 “He has a very different mission now,” Shaw told TheWrap. “He has this sense of conscience about this technology that he’s helping midwife into the world. It’s his moral obligation to exercise some kind of say over how the bomb is used.”

Winter has spent most of this season imprisoned at a U.S. internment camp, where he realized the Nazi bomb he has been racing to defeat was just propaganda drummed up by the U.S. government. But he nevertheless decides to return to Los Alamos at the end of last week’s episode, despite the best efforts of his wife, Liza (Olivia Williams).

“Col. Darrow is sort of the first Cold Warrior,” Shaw said. “He sees this very different kind of conflict waiting just over the atomic horizon. So he approaches his job with an almost evangelical sort of mission.”

Shaw also touched on the storyline of Jim Meeks (Christopher Denham), one of the scientists from the implosion group who has been passing information to the Soviets. But Shaw insisted Meeks is not a villain.

“What’s been exciting for us is telling the story of a character that most viewers probably assumed would become a villain or an antagonist,” he said. “But that’s not the case. Every character on the show is trying to save the world in their own way. Meeks is not a Communist ideologue at all. He’s just a young, brilliant kid who is terrified by the implications of this weapon.”

It is a production of Tribune Studios, Skydance Productions, Shoe Money Productions, and Lionsgate Television.