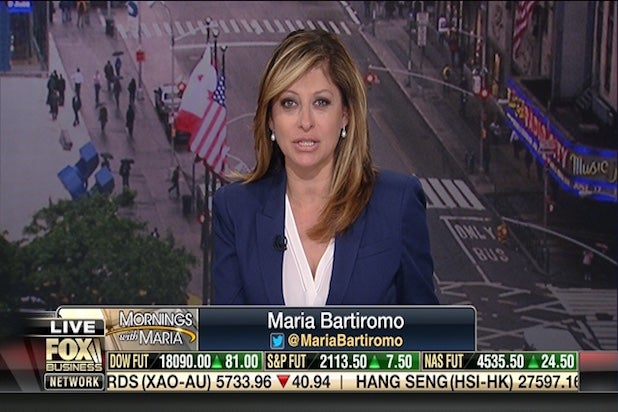 “I think this whole idea that there is a war on woman is nonsense,” says Fox Business Network anchor Maria Bartiromo. “I’m a woman, I don’t feel there is any war on me. I don’t see any of the sexism, I really don’t.”

TheWrap asked Bartiromo, who has moderated two GOP debates this election cycle, about gender bias in a race in which Hillary Clinton is trying to become the first female Democratic nominee. Carly Fiorina has dropped out on the Republican side.

Speaking of sexism: For years, Bartiromo has been widely nicknamed “the money honey” because of her telegenic looks and financial smarts. But today she likes a different name: “Mighty Killah.”

It’s the Wu-Tang name bestowed upon her by Ghostface Killah during his fight with pharmaceutical pariah Martin Shkreli. She invited the rapper on her show, and he took her up on the offer.

That kind of eye for drama that has helped FBN end 2015 as the fastest growing cable network on television, and given “Mornings with Maria” its highest-rated month ever in January. Bartiromo also hosts “Sunday Morning Futures” on the Fox News Channel.

As Bartiromo celebrates her two-year anniversary with the network, she rapped with us about everything old and Wu.

Your boss, Roger Ailes, stood up to GOP frontrunner Donald Trump to defend his employee, Megyn Kelly. How would your former employer, CNBC, handle a similar situation if a candidate attacked one of their moderators?

I don’t know. But I know that we all have a confidence that Roger stands behind us. That is an incredible thing, to go to work everyday and know that your boss has your back. You want to work harder and harder to make him happy. You know, at the end of the day, the company is in your corner. I’m not saying CNBC would not be, I don’t know how that would play out. At Fox it’s a much smaller triangle. There is one boss. There aren’t a lot of middle managers or grey areas in terms of who is in charge.

As someone who has moderated two debates this election cycle, what has surprised you the most so far now that caucuses and primaries are kicking off?

I’m surprised that we haven’t gotten more into the meat and potatoes in terms of substance on some of the issues. In my debates, I’ve tried really hard to focus on the issues that I think are important to the American people. Like immigration, which very few people talk about. I did an interview on Sunday with Paul Ryan and I was really happy to see the way that the press is writing about it. There is an article on Breitbart that basically says, “Maria has differentiated herself by focusing on this issue.” I feel like I have tried really hard to talk about immigration because I do feel like this is one of the fundamental issues of any election. Who gets to live in this country? Who gets to work in this country? Who get to participate in our democracy? This lack of questioning on some of the debates about the economic issues of that day, it’s just a surprise to me.

CNN has back-to-back GOP Town Hall events starting tonight. Do you think the Town Hall format, as opposed to a debate, is an opportunity for candidates to get into the meat and potatoes of their plans?

Town Halls and debates are very different. I really like what Anderson Cooper and CNN has been doing with their Town Halls. It’s giving the public an opportunity to see the candidates interact with people, which is nice.

Do you know if Fox has reached out to the RNC about hosting a Town Hall?

We’ve been just doing debates. And the debates have been working so well.

What should investors be rooting for in terms of the situation surrounding Justice Antonin Scalia’s eventual replacement?

I don’t think it has been a Wall Street, markets or investor issue. Yes, there are a handful of cases in front of the court right now that I guess could impact markets, but not really. I don’t think investors focus on this at all. I think what’s been said is true. The President has every right and responsibility to nominate his choice, but the Senate also has their right to either set up a vote or not. I could see both arguments.