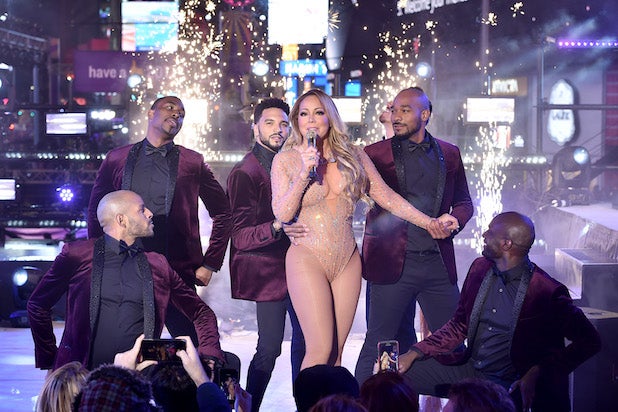 Jenny McCarthy would like it to be heard loud and clear: Mariah Carey’s performance on “Dick Clark‘s New Year’s Rockin’ Eve” was not sabotaged for the sake of ratings.

McCarthy, who co-hosted this year’s festivities, tore into Carey for reportedly laying blame for the televised fiasco on Dick Clark Productions.

McCarthy went on to suggest that Carey’s voice is “not there anymore” for the material she performed, and said that the singer’s nerves probably got the best of her.

“I think Mariah was nervous as hell. I think she chose really tough songs to try to sing along with,” McCarthy said. “I think ‘Emotions,’ that song … her voice is not there anymore. I don’t believe there was a problem with her inner ears. I just don’t. I think she used it as an excuse.”

McCarthy allowed that she did initially have sympathy for Carey, but that the “sympathy stopped, however, the moment she accused Dick Clark Productions of sabotaging her performance.”

“I do understand our egos, of course, want to blame everyone but itself for mistakes,” McCarthy offered. “Let me tell you something: If Dick Clark were alive today, I guarantee he would be on air right now fighting back. He’s not, so I’m going to.”

She went on: “I have never seen a production company … more supportive of their musical guests. So, for her to defame them, was so incredibly insulting for the group of people who work their balls off preparing and rehearsing.”

According to a TMZ report, Carey’s team believes that Saturday’s performance was intentionally sabotaged for the sake of ratings. Carey’s performance during the ABC telecast drew widespread criticism for its ramshackle nature. As her backup dancers continued to perform, the vocalist pretty much walked around the stage, repeatedly asking a technician to turn her speakers on. At one point she told the crowd, “I’m trying to be a good sport here.”

A representative for the singer told TheWrap on Monday that Carey’s ear piece wasn’t working right from the get-go. When the pop diva was ready to walk to the stage, Mariah’s team informed Production of the problem — an issue that was essentially brushed off.

“Production said it’s because they didn’t work well in the tent and to go up to stage,” the rep said. “Once on stage, [Carey] told the stage manager that the ears were not working but production decided to just go live instead of cut to commercial to fix the problem.”

“As the premier producer of live television events for nearly 50 years, we pride ourselves on our reputation and long-standing relationships with artists. To suggest that [Dick Clark Productions], as producer of music shows including the American Music Awards, Billboard Music Awards, New Year’s Rockin’ Eve and Academy of Country Music Awards, would ever intentionally compromise the success of any artist is defamatory, outrageous and frankly absurd,” the statement noted.

Listen to McCarthy sound off on Carey below.