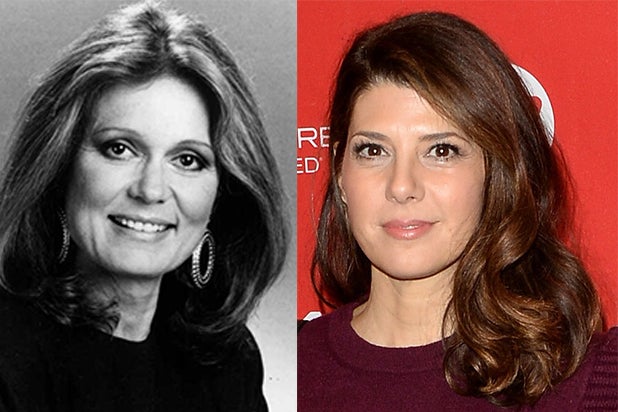 Oscar winner Marisa Tomei is set to play social and political activist Gloria Steinem in “Ms.,” a miniseries co-starring Kathy Najimy that is currently in development at HBO.

Steinem will serve as a consultant on the project, which Bruce Cohen (“Silver Linings Playbook”) is executive producing with George Clooney and Grant Heslov, as well as Tomei and Najimy.

The miniseries will examine the creation of Ms. magazine in 1971 through the eyes of both the women who founded and ran it, and those whose lives it changed during the world-altering early days of the Women’s Movement.

Tomei will play Steinem, the journalist and activist often recognized as a leader of and spokeswoman for the feminist movement in the late 1960s and 1970s. She was one of the founders of Ms. magazine and later co-founded the Women’s Media Center with Jane Fonda and Robin Morgan. Today, Steinem travels around the world giving lectures about equality.

Najimy will play Bella Abzug, a U.S. Representative who was among the leaders of the Women’s Movement. In 1971, she joined Steinem and other leading feminists to found the National Women’s Political Caucus. Nicknamed “Battling Bella,” she helped plan President Gerald Ford’s National Women’s Conference in 1977.

Tomei co-starred as a journalist in Clooney and Heslov’s political drama “The Ides of March.” Tomei, who won an Oscar for “My Cousin Vinny,” will soon be seen opposite Sam Rockwell in “Loitering With Intent,” which she also produced. Represented by CAA and Untitled Entertainment, she’s currently filming CBS Films’ Christmas comedy “Let It Snow.”

Najimy, who recently recurred on HBO’s “Veep,” is represented by Abrams Artists Agency, while CAA reps Clooney and Heslov.