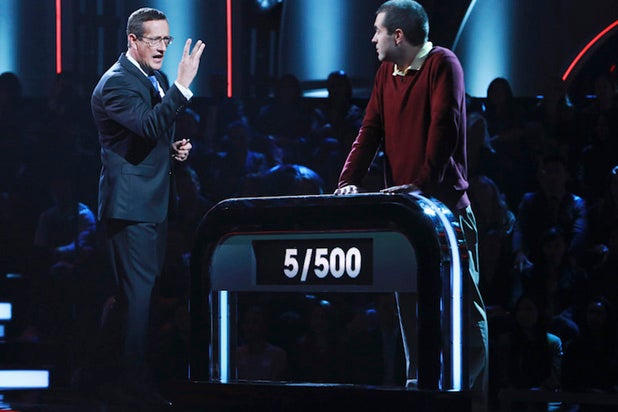 500 QUESTIONS - "101" - It is the ultimate test, where intellect, strategy and stamina are all equally essential in order to win. The innovative "genius game show," hosted by CNN's Richard Quest ("Quest Means Business"), premieres WEDNESDAY, MAY 20 (8:00-9:00 p.m.), on the ABC Television Network. On the premiere episode, "101," an attorney and a neuroscientist face off in this intense test of knowledge, where the toughest question of all is, can either of them answer 500 questions. (ABC/Ron Tom) RICHARD QUEST, DAN MCCARTHY

The series from executive producers Mark Burnett and Mike Darnell will return in 2016. The first season aired in May as a multi-night primetime event.

“When we created ‘500 Questions,’ our hope was to bring the event game show back to primetime,” Darnell said in a statement. “Thanks to ABC, we had a great summer run and achieved that goal. We are excited that the show is coming back for a second season.”

“I am so glad we are back; I love this game show event. To win, these geniuses need both brains and endurance as they tackle television’s toughest questions,” said Burnett.

“500 Questions” challenges contestants to answer the 500 most difficult general knowledge questions ever devised without getting three wrong in a row. Richard Quest served as host.