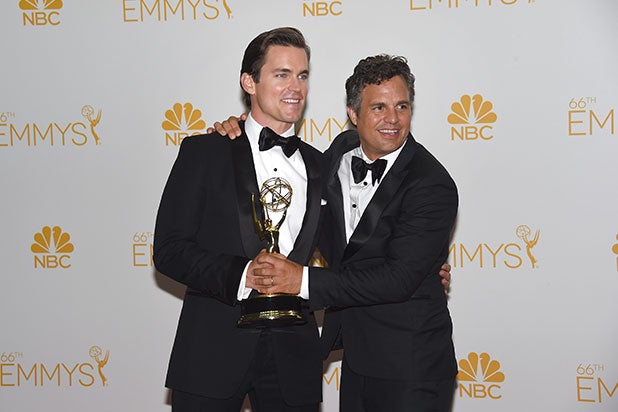 Mark Ruffalo addressed criticism regarding Matt Bomer‘s casting as a transgender sex worker in his new film, “Anything,” saying he is “glad we are having this conversation.”

To the Trans community. I hear you. It's wrenching to you see you in this pain. I am glad we are having this conversation. It's time.

Ruffalo is an executive producer on the project, in which Bomer’s character befriends a suicidal man who moves from Mississippi to Los Angeles after his wife’s death. The film will also star Maura Tierney, Micah Hauptman, Margot Bingham and Melora Hardin.

In all honesty I suggested Matt for the role after the profound experience I had with him while making "The Normal Heart".

Ruffalo and Bomer starred in HBO’s “The Normal Heart,” in which Bomer plays Ruffalo’s love interest. Bomer won a Golden Globe for the film.

When news broke that Bomer, a cisgender but openly gay actor, would play the transgender role in the film, people took to Twitter to express their frustration that a real trans woman wasn’t cast in the film.

I auditioned for this. I told them they shouldn't have a cis man play a trans woman. They didn't care. https://t.co/T7YFe6OeX9

Some even called for Bomer’s role to be recast, but Ruffalo revealed the film had already wrapped.

“The movie is already shot and Matt poured his heart and soul into this part,” said Ruffalo. “Please have a little compassion. We are all learning.”

@Vodstok The movie is already shot and Matt poured his heart and soul into this part. Please have a little compassion. We are all learning.

Other cisgender actors who have played transgender characters include Eddie Redmayne in “The Danish Girl,” Jared Leto in “Dallas Buyers Club” and Jeffrey Tambor in “Transparent.”

“Anything” was written and directed by Timothy McNeil. The film does not have a release date yet.