In addition to having a selection of her own work screened at AFI Fest between Nov. 7 and 14 in Hollywood, Varda was asked to choose films that have influenced her lengthy career, which includes such classics as “Vagabond,” “The Gleaners and I” and “The Beaches of Agnes.” 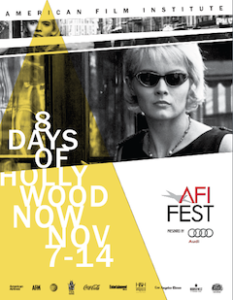 As Varda explained in the AFI press release, she found herself unable to choose films that influenced her own work. “When I wrote and shot my first film in 1954, ‘La Point Courte,’ I had hardly seen 10 films,” she said. “My culture was books, painting and theater … If I had seen the masterpieces that I discovered later I certainly would not have dared to create a film at 26. My ignorance gave me freedom and audacity.”

The four films Varda has chosen, she said are films “that have been important in my life”: Fassbinder’s “The Marriage of Maria Braun,” which she called “one pearl of Fassbinder films”; Bresson’s “Pickpocket” “for its singular way of interpreting the art of stealing”;  Cassavetes’ “A Woman Under the Influence” (photo at top), “a delicate and complex portrait of a woman as well as of the people around her”; and Scorsese’s “After Hours,” “a strange ephemeral nightmare beautifully treated.”

The official artwork for the festival includes images from Varda’s film “Cleo From 5 to 7.”

AFI Fest takes place from Nov. 7 through Nov. 14 at the TCL Chinese Theatre, the Chinese 6 multiplex, the Egyptian Theatre and the Hollywood Roosevelt Hotel, all in Hollywood.