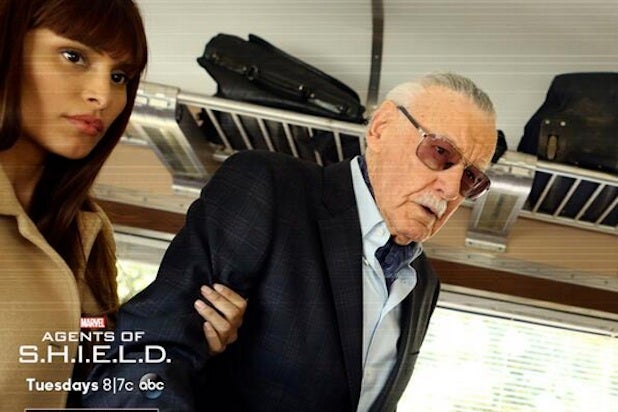 Marvel icon Stan Lee will give his blessing (in the form of one of his famous cameos) on ABC’s freshman series, “Marvel’s Agents of SHIELD” on Tuesday’s episode airing at 8/7c.

“For once, my cameo actually has something to do with the plot! And I relate to a couple of the stars of the episode — although, only for a few seconds. But it was fun, I enjoyed it very much,” Lee told EW.

When asked if the role will be significant, he answered, “I think so – to the Marvel Universe, anyway.”

ABC has been mum on the nature of the appearance on Tuesday’s episode, titled “T.R.A.C.K.S.”, though Lee previously referred to it as “a big role.”

The episode follows Coulson (Clark Gregg) and the team, who are hot on the trail of the Clairvoyant, as they board a mystery train that seems to be headed for certain death.

Lee, the former president and chairman of Marvel Comics, has made his appearances (both in person or via voice roles) in Marvel projects spanning the comic books, feature films and television shows a pop culture phenomenon.

He has appeared in all four Spider-Man features, “Daredevil,” the “X-Men” films, Disney XD’s “Ultimate Spider-Man,” TV’s “The Trial of the Incredible Hulk,” and all of Marvel’s Phase 1 and Phase 2 films, up to and including 2013’s “Thor: The Dark World.”

In another Marvel act of synergy, the company aired a crossover episode with “Thor: The Dark World” and “SHIELD,” which portrayed the aftermath of the movie’s events.