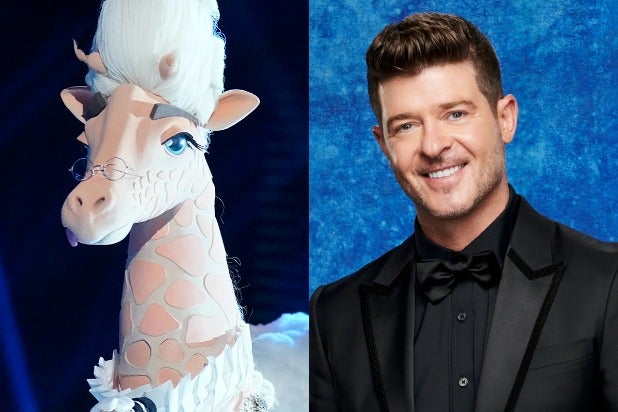 Not one judge guessed who was behind the Giraffe mask before he was eliminated and revealed on tonight’s episode to be Brian Austin Green. And while the “Beverly Hills, 90210” alum is willing to forgive the incorrect names thrown out by Ken Jeong, Jenny McCarthy, Nicole Scherzinger and guest panelist Joel McHale, he told TheWrap that Robin Thicke really should have been able to figure out it was him.

“I grew up with Robin, I’ve known Robin my whole life,” Green, who dabbled in hip-hop music in the ’90s, said. “We were best friends for probably three years. So that dude knew my voice before I went through puberty and my voice changed. So he knows my cadence, he knows everything about that. And I said to [‘The Masked Singer’] producers in the beginning, ‘The one that I’m most worried about is Robin. If anybody is going to figure out my voice, he is, because he knows me.'”

On the season premiere, Green gave his first performance as the Giraffe, singing Black Eyed Peas’ “Let’s Get It Started,” and Thicke guessed that he might be Vanilla Ice, adding that he felt like he knew the voice, but was not able to place it.

“So I did the first performance and he says, ‘You ever get that feeling like you know somebody’s voice but you can’t put a face to it? I feel like I’m going to put a face to that voice.’ And he said that and I was like, ‘Oh man, here we go. He’s going to figure me out.’ And so the first episode was that, and then the second performance, it completely strayed.”

But in tonight’s episode, he guessed Travis Barker, while some of the other judges went with Green’s “90210” co-star, Jason Priestley.

“They are saying things as close as you can come, and they are literally then going in a completely different direction,” Green said. “So, awesome, I think that I’m just going to keep doing what I’m doing (after the first episode). As a matter of fact, I’m going to try to do as many things as possible to throw them off at this point, because that’s just going to be the fun of it for me. I’m going to add accents when I’m speaking, I’m going to walk with a limp. I’m going to do all of these things for the fun of it to see how far I can get. And then after the second episode that was it for me, so that’s as far as I’m going to get,” he added, laughing.

Also Read: 'The Masked Singer' Season 4: Here Are the Best Fan Guesses for Identities of Group B Contestants

And even though everyone was “way off” in their guesses, Green truly holds Thicke the most responsible here.

“I love Robin, but he’s terrible at that game. He’s horrible,” the actor said, noting that he and Thicke slept over at each other’s houses, guest-starred on an episode of Thicke’s late father Alan Thicke’s “Growing Pains” together, and even had a music group as kids.

Green said that there are no hard feelings and the two laughed about it after he was revealed on the show. Green even told Thicke he had initially been planning on singing one of Thicke’s songs.

“So I text him as I was driving home, and he had just sent me a laughing emoji, and I told him after that, dude, my first song, I was going to do ‘When I Get You Alone,’ until I sang it — that’s a ridiculously hard song to sing. And he was like, dude, I can barely sing that song. So don’t feel bad. You did a great job.”