It’s no secret that new media often relies upon old media to supplement its web pages with fresh content — but just how heavily?

New media is "extremely dependent" upon its predecessors, according to the University of Illinois’ coordinator of information technology and research Kalev Leetaru, who analyzed an astonishing 171,717 page updates from January 2002 to December 2008 on the Drudge Report.

Since its inception, the news aggregation website founded in the late 1990s by Matt Drudge has had a large impact on the media sphere — Drudge himself was deemed one of Time magazine’s most influential people in 2006. But in his report, published in the web journal First Monday, Leetaru says he was curious to find out how dependent a "’new media’ aggregator [is] on the ‘old media’ it draws from."

His findings aren’t entirely shocking: Drudge’s bread and butter are the wire services and mainstream media outlets. The site has found success by discovering the odder, more obscure stories from these outlets that are sometimes overlooked and, in turn, propelling them into popular news stories.

In the timespan Drudge looked at, the site had linked to over 100,000 stories. Leetaru breaks those links down by country and domain, and finds that it’s mostly "old media" who’s getting the attention. 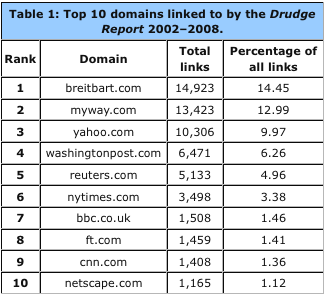 Breitbart most likely scores high because Andrew Breitbart used to work for Drudge and was linking to himself. The Washington Post banks nearly twice as many links as the New York Times, while newbie Politico ranked 16th — even though it’s only been in existence for two of the years Leetaru studied.

Leetaru also found that Drudge’s daily and hourly update cycles match the cycles of the outlets he draws almost 90 percent of his coverage from.

As Gawker highlights, Leetaru’s point was emphasized by the drop-off in updates on Drudge’s site during the Iraq War in 2003, when news outlets devoted a majority of their coverage to Iraq.

"As newspapers focused their resources on Iraq and stopped writing about animal attacks, weather, and robot sex," the blog notes, "Drudge had less to work with."