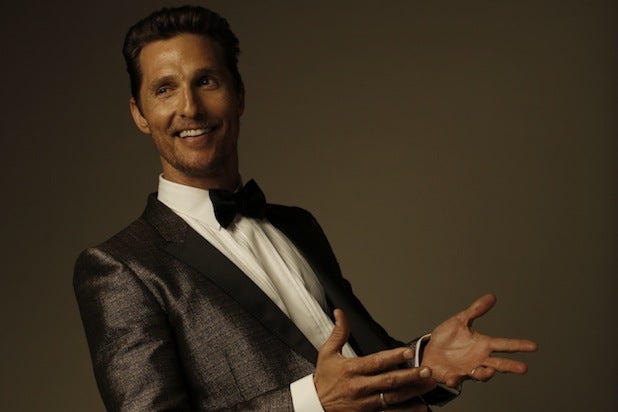 Matthew McConaughey is nearing a deal to star in the rags-to-riches tale “Gold” for Teddy Schwarzman’s Black Bear Pictures, and he’s also being courted for a lead role in Josh Boone’s adaptation of Stephen King‘s “The Stand,” TheWrap has learned.

McConaughey has been circling “Gold” for several months, as TheWrap first heard he was in talks to star in the project back in December 2013, though his representatives denied it at the time.

Regarding “The Stand,” writer-director Boone has had McConaughey in mind ever since he won the coveted job, which he inherited from filmmakers such as Ben Affleck, David Yates and Scott Cooper. While an individual familiar with the project told TheWrap that Boone initially envisioned McConaughey as Stu Redman, who’s immune to the plague responsible for wiping out most of the world’s population, an insider confirms that McConaughey is now being eyed to play Randall Flagg, who’s the primary villain in King’s epic tale of good vs. evil.

The Oscar-winning actor is Boone and author Stephen King’s first-choice for the movie, and it’ll likely be up to the actor to choose which role he wants to play, should his schedule allow him to be involved.

Also read: Woody Harrelson on His Emmy Nomination: Thanks, But I’m Voting for Matthew McConaughey

However, McConaughey’s involvement in “The Stand” is not nearly as concrete as “Gold,” which is based on a true story about the 1993 Bre-X Mineral Corporation mining scandal.

Written by Patrick Massett and John Zinman, “Gold” follows a rough-around-the-edges prospector who stumbles onto one of the largest gold mines in the world in the Indonesian jungle.

Stephen Gaghan is in talks to direct “Gold,” which Paul Haggis and Michael Nozik are producing through their Hwy 61 banner.

Haggis developed the project before showing it to Michael Mann as a writing sample for Massett and Zinman. Mann then signed on to direct and produce through his Forward Pass banner, but he exited the project in March 2012 in order to focus on developing “Blackhat,” Legendary’s upcoming cyber thriller that stars Chris Hemsworth.

“The Stand” was previously adapted in 1994 as an ABC miniseries starring Gary Sinise as Redman and Jamie Sheridan as Flagg.

Deadline first reported that Gaghan was in talks to direct “Gold,” while McConaughey’s casting in “The Stand” has been rumored online for several weeks.