Matthew McConaughey has made his advertising directorial debut with a new TV commercial for Wild Turkey that also features the actor.

Narrating the 30-second ad, the Oscar winner also comes into view at the 20-second mark — seen tickling the ivories before receiving a glass of the well-known bourbon.

Though the actor is infamous for his love of bongo-drum-playing, does McConaughey also play the piano in real life? Yes he does, TheWrap has confirmed. He was playing a real ditty while being filmed for the ad, his reps said.

We couldn’t help but recall another video that mixed McConaughey and the keys — the widely shared “Interstellar”-Keyboard Cat mashup meme from yesteryear. (Yes, it’s still funny.)

While the Wild Turkey commercial marks the actor’s first foray into TV ad directing (behind-the-scenes photo below), this isn’t the first thing he has stepped behind the camera.

McConaughey directed two short films in the 1990s — but no feature-length films yet. 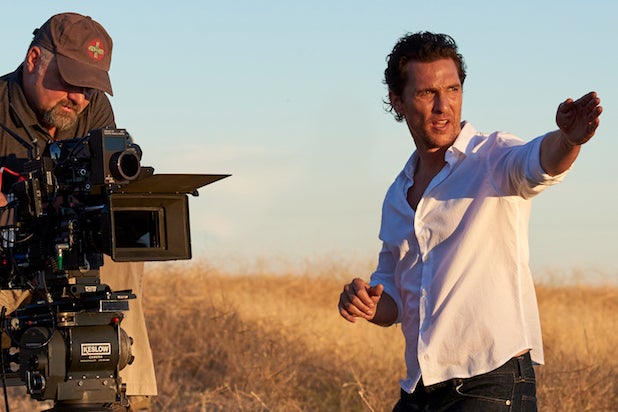 Of course, this isn’t the first ad we’ve seen from the actor, who appeared in a Lincoln car ad in 2014 (which was famously parodied by Jim Carrey).

Since being named Wild Turkey Creative Director last month, this is the first vision audiences have seen from McConaughey.

Following images from a dimly lit speakeasy, the actor narrates the words: “We’re not in a rush to be most popular, not in a rush not to be. Real bourbon, no apologies. If it’s for you, you’ll know. Wild Turkey. It’ll find you.”

McConaughey has been worked closely with J. Walter Thompson New York and RSA Films in Los Angeles on the campaign. The new ad was shot on location in Southern California.

There’s also a short film covering the actor’s work that can be seen here.