Matthew Modine took movie audiences by storm in the 1980s with searing performances in such films as "Streamers," "Birdy" and "Full Metal Jacket." These days, in addition to gently mocking his image on the Geffen Playhouse stage, where "Matthew Modine Saves the Alpacas" finishes its run Sunday night, he’s promoting "Opa," a Tracy-and-Hepburn-style romantic comedy filmed in Greece and opening this weekend.

He spoke with Eric Estrin about making love to Rosanna Arquette in his first film role, how John Sayles directed the action, and what to do when the joint goes out. 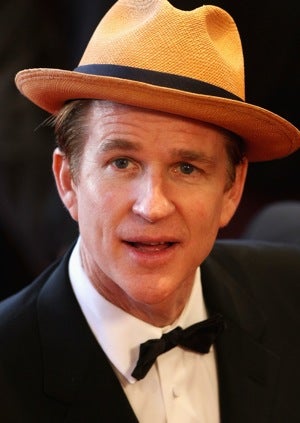 My dad was a drive-in theater manager while we were living in Utah. I saw a documentary about the making of the movie "Oliver!" when I was young, and because I identified with those kids in the movie, I thought, "Oh, I should learn to sing and dance like that."

We moved all the time because they were tearing the drive-ins down, and I felt like those were the two things missing from my life.

So I started when I was about 11. In Provo there was a little school that taught tap dancing and tumbling. My dad told me that if I’m going to be an actor, I should learn how to fall down. And I think there’s a great metaphor in that.

I joined the glee club and stuff like that when I was in seventh grade and took acting classes when I was in high school, and then moved to New York City when I was 18.

It wasn’t a straight path; there were lots of diversions. But it was always a desire. And then when I got to New York City, I worked with a really wonderful acting teacher named Stella Adler.

Margie Simkin was casting "Baby It’s You." She was the first casting director I met who ever said, "That was good; now try it this way." And then she said, "Great, I’d like you to come back tomorrow and meet the director John Sayles and the producer," who was Griffin Dunne. And I got the job.

John was huge in the New York film world. Bruce Springsteen was gonna give him music for the film. And every young actor in town that you’d bump into around town at auditions — you know, Fisher Stevens, Robert Downey Jr., Tracy Pollan, Rosanna Arquette, Vincent Spano — we all found ourselves in the same film with that opportunity that comes once in a lifetime.

On the first day of filming, John realized that the first meeting between me and Rosanna Arquette’s character was too brief, and he was gonna have to open the role up a little bit, expand the part, because it was lopsided. The second scene we had together, we were making love.

So John added what was for me a huge monologue, which was a story I told, and he gave it to me about 45 minutes before we started filming.

It was crazy. What are the chances? What are the chances that some kid who grew up in Utah with a desire to go to New York would find himself in that position? It’s like that great line in "Broadcast News," where Bill Hurt says to Albert Brooks, "What do you do when your life exceeds your dreams?" And Albert Brooks says to Bill Hurt, "You keep your mouth shut." That’s how I felt.

John wasn’t like so many directors today sitting behind a monitor or way far away. He was in as close as he could be to the edge of the frame and not be in the scene. He was probably two feet away from me when we were filming the love scene.

I was a young actor who was uncomfortable having to do something intimate in front of so many people. And so he got on the floor and was just sitting right at the edge of the frame. I could feel his hands going up in the air, and his eyes, like coaxing a performance out of a musician. It was fantastic.

Here you are, you’re an actor, and you’re trying to think of all the things that you’re gonna do, when you’re gonna do it and how you’re gonna do it, and all this preparation, and then Rosanna passes me a joint in the scene, and I take a puff of it, but what’s happened while we’ve been talking, the joint has gone out. And I thought, "Oh, do I pretend that the joint is burning? No, that would be stupid."

This is going through your head at a thousand miles an hour. And I picked up the matches and relit the joint, and that felt like the most dangerous, provocative thing in the world to do at that moment — to do something that wasn’t scripted and that you hadn’t prepared.

But it’s also just a great lesson about acting: S–t happens, and you have to deal with it.

The movie was very successful, and to this day, it opened the doors for all those actors that were involved. That was something that Harold Becker saw that got me the audition for "VisionQuest," that got me in the door to meet Robert Altman for "Streamers."

It was really so much fun to be given that gift.