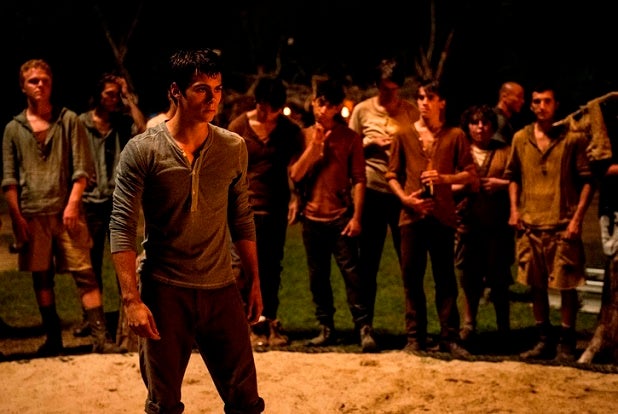 “The Maze Runner” opened at No. 1 in all five overseas markets in which it debuted this weekend — and topped the openings of “Divergent” in each of them, distributor Fox said Sunday.

It will open in 48 new overseas markets, as well as North America, on Friday. “Divergent,” which launched a young adult franchise for Lionsgate in March, has taken in $286 million worldwide.

It was a strong weekend abroad for Fox, which also saw “Dawn of the Planet of the Apes” retake the top spot in China with $7.6 million, upping its haul there to $95 million and raising its international total to $464 million, and its global haul to more than $670 million.

The studio’s “The Fault in Our Stars” is bearing down on $300 million worldwide. The low-budget teen romance added $3 million from 12 markets to lift its foreign total to $175 million.

Universal’s Scarlett Johansson sci-fi thriller “Lucy” was the top film abroad this weekend, taking in $23.4 million from 55 markets. That ups its foreign total past $230 million and its global haul to nearly $355 million. It opened at No. 1 in Russia with $9.6 million, the biggest non-3D opening of the year. It also debuted on top in Norway, Colombia and Ecuador.

Also read: ‘Guardians of the Galaxy’ Rockets Past $300 Million at Both Domestic, Foreign Box Office

“Guardians of the Galaxy” is up to $305.6 million at the overseas box office and more than $611 million worldwide. It crossed the $300 million mark at both the domestic and foreign box office this weekend. It will debut in China on Oct. 10.

Sony’s Cameron Diaz-Jason Segel comedy “Sex Tape” opened at No. 1 in Germany with $4.5 million and in France with $1.5 million. Both of those topped the debuts in those countries of “We’re the Millers,” Sony said Sunday.