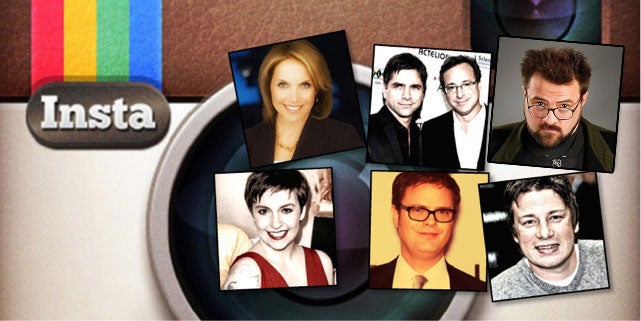 For better or — usually — worse, Instagram makes it easy for the socially minded to give friends a graphic peek into their lives. Unfortunately, it's not easy to find folks who post pictures that are worth looking at — especially Hollywood types who seem mostly interested in promoting their latest projects.

Not to worry. We found some top names in movies, TV and music whose little square photos rise above the rest. From Rainn Wilson playing "American Gothic," to Jamie Oliver playing with his food to Katie Couric playing with a royal friend, here are 15 celebrity Instagram photo-sharers worth following.

1. RAINN WILSON
@rainnwilson
Actor/producer, "The Office"
Number of followers: 179,756
Number of photos: 143
Why follow? Wilson's Instagram reflects the same offbeat humor he's shown on “The Office.” His most recent uploads include a table-read with his co-stars; Dwight Schrute vs. "Homeland" terrorist mastermind Abu Nazir, and his epileptic pit bull, Yenko, releasing the longest strand of drool known to man or dog. The crown jewel, however, is Wilson's "Office"-themed parody of Grant Wood's American Gothic painting.

2. KEVIN SMITH
@thatkevinsmith
Director/screenwriter, "Clerks," "Dogma," "Red State"
Number of followers: 76,721
Number of photos: 82
Why follow? Because when Smith is not obsessing over all things comic-book geekdom or the NHL finally returning, he provides poignant thoughts on fatherhood. Like this reflection on his musically inclined daughter, Harley Quinn: "A long time ago, this little bass player lived in my balls. Now, she makes beautiful music." He also has lots of famous friends (like Merle from "The Walking Dead" and the entire "Epic Meal Time" crew) willing to strike a pose.

Caption left: "This is me with me @HarleyPlays and the @EpicMealTime crew, makin' bacon!"
Caption right: "For Valentine's Day, @JenScwalbach had us done as piñatas by @BunnyCorpse. Later, we're gonna split each other open!"

3/4. BOB SAGET & JOHN STAMOS
@bobsaget, @JohnStamos
"Full House" co-stars, still best friends
Number of followers: 20,845/113,579
Number of photos: 217/188
Why follow? It’s nice to see Danny Tanner and Uncle Jesse constantly connecting on Instagram, where Saget seems to constantly tease his BFF. When they're not calling each other out, Saget sticks to posting images reflective of his somewhat-dirty sense of humor, while Stamos smiles alongside famous friends like Elton John, Conan O'Brien and — oh hey, it's Bob Saget again.

Caption left: "Years ago I was honored at San Diego Zoo and named a naked mole rat 'Uncle Jesse.' There's a plaque there still apparently. @JohnStamos "
Caption right: "@bobsaget begrudgingly presenting ANOTHER wax figure of me from my Saturday Night Fever days"

5. DAN HARMON
@danharmon
Creator/former showrunner, “Community”
Number of followers: 15,908
Number of photos: 353
Why follow? To see just what goes on inside Harmon’s mind — like an epic rant destroying a "dipshit hipster" bar for its terrible service and stupid rules. Or more recently, a four-picture dissection of marketing printed on a Pringles can.

Caption left: None
Caption right: "The plot thickens for seemingly no reason."

6. KATIE COURIC
@katiecouric
Talk show host, "Katie"
Number of followers: 44,700
Number of photos: 623
Why follow? Couric has met every famous person in existence — and documents every encounter. When she's not busy shaking hands with the Queen of England or posing with Mike Tyson on the "Katie" set, she's enjoying the simpler things in life like homemade beef bourguignon, a winter snowfall, her favorite restaurant in NYC's Chinatown and a girl's night out. It's also comforting to know that even an accomplished smarty pants like Couric falls victim to the occasional typo or factual error.

Caption left: "History buffs! 51 years ago today, Elizabeth became queen! I knew her when… "  (Elizabeth actually became queen 61 years ago)
Caption right: "Had to make a stop at Joe's in Chinatown!!!"

8. LUDACRIS
@itsludacris
Rapper/actor, "Fast & Furious 6"
Number of followers: 933,408
Number of photos: 643
Why follow? He’s got an eye for ridiculous photos and lumps them together with the original hashtag, #nowthatsludicrous (or, depending on what mood he is in, #nowthatsludacris). Recent “ludicrous” uploads include his face perfectly shaved into the back of a fan's head, a stripper with a prosthetic metal leg and a German Shepherd dog aiming assault rifles. Want to join in? Upload your with the hashtag mentioned above and he just might re-post.

Caption left: “Just got to New Orleans & soon as I jump in the car…#nowthatsludicrous”
Caption right: "And the battle for #1 fan plot thickens. #nowthatsludacris"

9. LENA DUNHAM
@lenadunham
Writer/director/creator/star, “Girls”
Number of followers: 294,762
Number of photos: 422
Why follow? Fortunately for fans of her Golden Globe-winning comedy on HBO, staff writers and co-stars frequently make appearances in photos at exclusive events or candid camera moments Dunham calls "creepin." She also proves fame isn't all it's cracked up to be in some photos, like one taken at 7 a.m. in a "Today Show" dressing room where she's "sprawled on the floor like an Ohio State student hungover at the Cancun Airport."

10. BOBCAT GOLDTHWAIT
@bobcatgoldthwait
Comedian/Writer/Director, "World's Greatest Dad"
Number of followers: 4,181
Number of photos: 156
Why follow? Goldthwait knows a good photo op when he sees it — like last week, when his cat crawled into his underwear around his ankles while he was perched on the toilet. Or when he was at Flaming Saddles, a popular NYC gay bar, and decided to join the "hot cowboys" for a dance atop the bar. And then there are his creative self portraits.

Caption left: "I like to dress like Burgess Meredith when I watch Rockem Sockem Robots. #myhotelmaytrapkids"
Caption right: "Squeaky Fomme thinks I would look good with a mustache. It's nice to be home."

11. CHELSEA HANDLER
@chelseahandler
Television host, "Chelsea Lately"
Number of followers: 189,909
Number of photos: 76
Why follow? She's not afraid to trash-talk her famous guests, like when she posted a screenshot of an interview with Blake Shelton and said she finds him "more and more stupid" every time he stops by her show. When she's not pairing pictures with her signature snark, she's uploading pics of her adorable dog Chunk and her equally adorable sidekick, Chuy Bravo. Most recently, she posted a picture of Dave Grohl showing off a Chelsea tattoo above a bit of plumber's crack.

Caption left: None … but, yes, that's Dave Grohl and his tattoo.
Caption right: "Richard Simmons and I made love at my holiday xmas party."

12. ELI ROTH
@realeliroth
Filmmaker, "Cabin Fever," "Hostel"; actor, "Inglourious Basterds"
Number of followers: 31,131
Number of photos: 246
Why follow? He not only posts lots of gory images for his horror following, but he also documents his globe-trotting adventures. And recently he surprised fans with the first image from his latest directorial effort, "The Green Inferno." Other treats include encounters with the likes of Mike Tyson and David Lynch, plus an occasional vintage treasure from his childhood.

Caption left: "Just a tiny glimpse inside my Hebrew school notebook from 1981."
Caption right: "Ringing in the new year w/ the Moai on Easter Island. Adios 2012."

13. THE FLAMING LIPS' WAYNE COYNE
@waynecoyne
Musician, filmmaker, "Christmas on Mars"
Number of followers: 14,837
Number of photos: 456
Why follow? The Lips frontman posts pictures that range between pretty, funny and just plain weird — something for everybody. He loves to capture sunsets and sunrises, and if you've ever seen one of his band's music videos or concerts, it's no surprise that he would spotlight a "pink fetus candle" stuffed inside "clear skull soap."

14. LAUREN CONRAD
@laurenconrad
Former reality star, “The Hills,” fashion designer
Number of followers: 1,711,642
Number of photos: 656
Why follow? The 20th most-followed Instagram account posts plenty. And you may be surprised by the quality of Conrad's particularly Pinterest-ing work. Bonus points: Very few selfies — and the pictures of her pets are of greeting card quality.

Caption left: "Dinner and love notes with some of my favorite people."
Caption right: "!"

15. NIKKI GLASER
@nikkiglaser
Co-host of MTV’s new late-night show, “Nikki & Sara LIVE”
Number of followers: 7,929
Number of photos: 297
Why follow? Her photography is as beautiful as it is hilarious, offering perfect snapshots of the not-so-perfect world we live in. And she's always looking for subjects to profile while riding the New York City subway, like a man trying his hardest to ignore a performing musician, a teenager deeply contemplating life and a woman stuck sitting next to the drunkest passenger on the train. But best, by far, is a woman with a look of sheer terror (or disgust?) on her face when her husband rests his head on her shoulder.

Caption left: "They were married."
Caption right: "Ignore the arts."

(This story has been revised to remove Jim Carrey after TheWrap learned the actor does not actually have an Instagram account.)