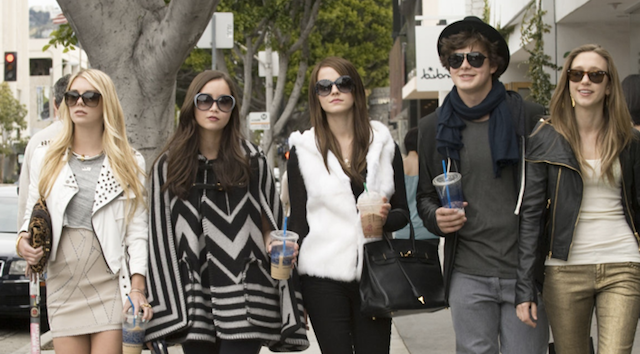 A rash of burglaries targeting stars like Paris Hilton and Lindsay Lohan by a group of fame-crazed teenagers stunned Hollywood, earning the group the catchy sobriquet "The Bling Ring."

These were criminals for the reality TV show age — a gang of club-goers, most too young to vote or drink, who stalked their B-list prey using Google maps and the internet. As icing on the cake, their thievery took place in and around Calabasas, Calif., the McMansion-filled seat of the Kardashian empire.

Also read: Why Amanda Bynes' Meltdown is Messier, Faster and More Public Than Ever

Of course, all good crime sprees must come to an end and this one concluded with prison time for ringleaders Rachel Lee and Nick Prugo. In a delicious piece of symmetry, one of the gang members, Alexis Neiers, was shooting the E! reality series "Pretty Wild" while her trial took place.

Reporter Nancy Jo Sales (pictured left) was on the scene nearly from the moment the teens were apprehended, writing one of the first in-depth accounts of their crime spree for Vanity Fair. She has turned that piece, "The Suspects Wore Louboutins," into a full-length book entitled "The Bling Ring," which is currently out in paperback. Its release coincides with the debut of Sofia Coppola's film of the same name, which hits theaters on June 14.

TheWrap spoke to Sales about the costs of society's celebrity obsession, her thoughts on Coppola's film version of her work and why kids are awash in vacuous role models.

What drew you to this story?

You couldn’t make this up. It had all the elements that spark media interest.

It was a story about people who were perceived as rich kids. It had Lindsay Lohan. I have an unofficial beat which is reporting on kids and I also focus on celebrity, so whenever those two things intersect, I get interested.

Do you think the story itself played out like a reality TV show?

Yes. There were throngs of reporters fighting to get into the court room with the court publicist acting like a nightclub bouncer. Plus in  California everyone looks like on they’re on a soap opera. The lawyers were acting like they were on a reality show. In fact, one of them actually did appear with Alexis. It was surreal. You’d see Alexis sitting with the crew of her reality show having her makeup put on before going in to get arraigned. When Alexis got put in a jail cell she was put right next to Lindsay Lohan.

Of all the members of the gang, Nick Prugo elicits the most sympathy in your telling. Do you think he was the Bling Ring member with the strongest moral compass?

I don't think that his moral compass was working all that well when he was committing burglaries, but he’s a smart kid and he's had much more of an ability to examine his own behavior. He owned up and took responsibility for it. Alexis, for example, still claims she's innocent.

These kids were influenced by and emulated Paris Hilton and Lindsay Lohan, people who were better known for their legal troubles than their talent. Do you think having these kinds of role models is having a toxic impact on kids?

The media is reaching some kind of tipping point in terms of its obsession with celebrity culture. People like Paris used to be kind of funny, but at some point in the last decade it started not to be funny. We've been on a feeding frenzy where we were stuffing ourselves with bad food and now we need a vegan master cleanse.

What started out as a leak is now an oil spill and our culture is drowning in it. Kids are really impacted by it, because they don’t have a filter to know who you should emulate and they’re still figuring out what a role model is.

Also, the level of discourse around these stars made the kids feel like, “who cares if I rob these people? They’re trashy and stupid.”

But it was an incredible violation of someone's privacy and property. You read the grand jury testimonies of Orlando Bloom and Lindsay and they felt so violated. I never thought I'd feel so sorry for Paris Hilton, but these are real victims.

You say that the Bling Ring members were treated like stars when they were caught. Does that speak to how diminished stardom is today?

The very nature of celebrity is changing, because social media is breaking down the walls and there's a sense that anybody can become a celebrity now. Wasn't it Justin Bieber who was discovered on YouTube?

There's more freedom and opportunity and that's a good thing, but it can also be a bad thing because a celebrity's image and who they are as a real person somehow get blurred to the point where they get rewarded for exhibiting dysfunction.

I really feel like this Amanda Bynes moment we're having, with her tweeting all those pictures of herself in her underwear, is a continuation of the Bling Ring story.

Are there other cultural forces to blame beyond the changing nature of celebrity?

Definitely. There are a whole lot of crimes that people who are privileged are able to get away with. It goes all the way up to the top of the government where people at the time were breaking the law and nothing happened to them.

Look at the Bush administration, they were torturing people and giving away CIA agents’ identities. I’m not sure the Bling Ring members were thinking "we’re going to get away with this because George W. Bush got away with torture," but they know there is a different set of standards for the rich and powerful.

Do you like the way Sofia Coppola interpreted the story?

She did what great filmmaker does. She conveyed the milieu that we live in. She made some brilliant choices. There’s this one moment in the  film where all we see painted across the screen is the TMZ logo. With one stroke Sofia has said everything.

With cutting and editing, including lots of paparazzi and videorazzi footage, she makes the point that suddenly these kids and not the just the celebrities they robbed are the ones the paparazzi is chasing, so it becomes a dog eating the tail story.