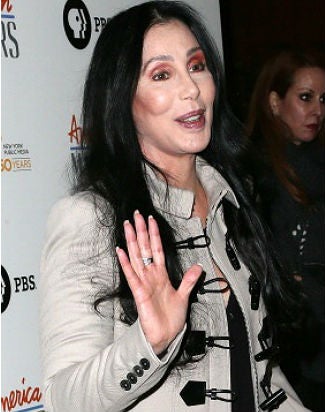 Don’t bother asking Cher how she feels about Donald Trump — she’ll let you know without being prompted.

Cher called Trump a “flaming asshole” on Thursday in the latest volley of an ongoing Twit-fit between the “Believe” singer and the “Celebrity Apprentice” boss.

The digital donnybrook between the two began Monday, when Cher expressed dismay after discovering that Trump has business ties to retail giant Macy’s. (Perhaps she stumbled across the online petition aimed at getting Macy’s to dump Trump as a spokesman.)

The singer quickly took a shot at Trump — who all but called for revolution in the streets following the reelection of President Barack Obama last week — along with Trump’s curious bird’s-nest of a hairdo.

“I’ll NEVER GO TO MACY’S AGAIN ! I didnt know they sold Donald Trump’s Line!” Cher fumed. “If they don’t care that they sell products from a LOUDMOUTH RACIST CRETIN, WHO’D LIE LIKE ‘HIS RUG’ TO GET SOME CHEAP PRESS ! I CANT BELIEVE MACY’S THINKS HE’S THE RIGHT ‘MAN’ 2 REPRESENT THEIR NAME!”

Trump quickly fired off a response — and clarified that the thing perched on top of his head isn’t a toupee.

“@cher should spend more time focusing on her family and dying career!” Trump replied, later adding, “I don’t wear a ‘rug’ — it’s mine. And I promise not to talk about your massive plastic surgeries that didn’t work.”

Cher corrected herself on the hairpiece issue — but added a parting shot, characterizing Trump as a fiery rectum.

“2 set the record straight..I Took a Cheap Shot At Trumps Hair…I WAS WRONG!” the “I Got You Babe” songbird offered.  “However….. He is a Flaming Asshole & I Hope Macy’s Dumps Him!”

Cher’s hope isn’t likely to be realized anytime soon. Macy’s — which carries Trump’s fragrance and clothing line — hasn’t made any indication that it plans to part with Trump. A company spokesman told TheWrap on Tuesday that Macy’s is more concerned with providing variety for its customers than the opinions of its spokespeople.

“Macy’s marketing and merchandise offerings are not representative of any political position,” the statement reads. “Many of the individuals associated with products sold at Macy’s — or at any retailer, for that matter — express personal opinions that are not related to the merchandise we sell or to the philosophies of our company. In our merchandise assortment, we strive to meet our customers’ expectations for unique and interesting products across a broad array of styles, categories and brands. This allows our customers to choose what they prefer.”