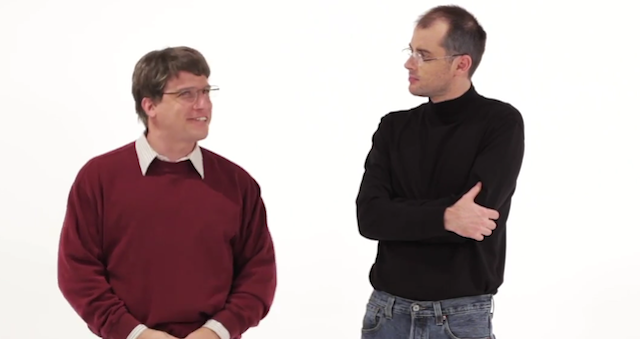 Peter Shukoff and Lloyd Ahlquist, known to their fans as Nice Peter and EpicLLOYD, are more popular on YouTube than Ellen DeGeneres, PSY and Justin Bieber.

Their channel, "Epic Rap Battles of History," has amassed more than 5.4 million subscribers thanks to videos of the two rappers dueling as Adolf Hitler, Darth Vader, Bill Gates and Steve Jobs.

While not as rich as Gates or infamous as Hitler, the duo serves as another prime example of how YouTube has turned aspiring entertainers into beloved cultural figures. Shukoff and Ahlquist aired the first episodes in September of 2010 after struggling to find their footing for more than a decade.

Their first video, filmed for $250, generated a few hundred thousand views thanks to established cohorts like KassemG and ShayCarl. Every new video now draws anywhere from 10 to 75 million views.

TheWrap talked with Shukoff, whose own channel has more than 2 million subscribers, about how Wu-Tang inspired his raps and why Hitler would have cussed like a sailor.

How did the idea for Epic Rap Battles come together?

I was a struggling musician and the guy who gave me my first performing job was Lloyd. He was a rapper and I had never rapped before, but he and I met rapping at a party.

A decade later we were both doing everything we could to try to find some leg up in entertainment. I got a job as a songwriter for what became Maker Studios and Lloyd and another guy did a bit where they’d battle rap.

He shared this idea with me and I shared it with a filmmaker (Dave McCary) and the three of us just put it together. I never would have considered myself a rapper, but I listened to a lot of rap growing up.

Wu-Tang Clan and Jurassic 5. I look at that and wonder if it informs what we do now. I would listen to Wu-Tang Clan as nine different rappers with nine distinct voices and would memorize every phonetic syllable.

How do you pick the different characters you impersonate?

When we first started we asked our audience and said 'we have this idea but we haven't formed the name, this great rap battle of history.' We got 150 or 200 suggestions. Now the average rap battle gets 400,000 comments.

What was the weirdest suggestion?

At the time our audience was much more focused; we understood everything they were saying. One that jumped out at us was John Lennon versus Bill O'Reilly. That was our first video and it had a $250 bduget. The second one had a $350 budget. We took a suggestion right from the audience – Darth Vader vs. Hitler.

Which you’ve turned into a recurring battle.

That one just blew up. The first one got maybe 150,000 views, which was enough to get excited about. The second one was one that got millions in the first week. I credit the audience completely. We did not think of putting Darth Vader against Adolf Hitler.

Also read: How Big Can Maker Studios Get Under New Chief Ynon Kreiz?

Do most of your ideas still come from the audience?

For sure. The internet as a whole is getting noisier but we look at the comments every day for ideas. There was just a whole discussion about inventors of different weapons and how they could go against one another.

You guys say some pretty incendiary and racy things during the show. Do you ever feel the need to limit that?

When we know we have something that can be really educational and cool, we probably hold back on the language a little more. Our recording engineer who used to work with Wu-Tang Clan and comes from a total hip-hop background said rap battles are three things – education, humor and fun. If one of those columns is really high, like Einstein versus Stephen Hawking – two physicists – there's a chance to get a whole bunch of kids excited about science. We knew it was our responsibility to leave out the F-bombs.

When we use Darth Vader and Adolf Hitler, these more menacing, evil characters, we think they would swear so we let them swear.

Have you heard from rappers?

We did one with Snoop Dogg.

Oh, but he's in the Maker network.

We got to meet RZA, who saw what we were doing. I don’t know if the rap community is into it or not. I hope they appreciate it. We try to make a lot of homages to the real sources of rap, which is not our background.

A lot of different YouTube stars have tried to build businesses outside of that ecosystem – like merchandise — to better support themselves. What are your plans outside of making ERB?

We can sustain our operation just with the content itself and that’s where our focus is completely. If we make sure every one of these videos we’re making is as good as it can possibly be, we’re gonna be fine.

How many views do you get for an average video?

And how much money do you see from that?

Enough to make the next one.

You’ve been with Maker since before it was Maker. How has your relationship with all the executives and talent there changed as your popularity has grown?

We’re all a part of the company, which was started by them and they included me in. When I wanted to know how to start an Instagram a couple of weeks ago, I looked to Kassem [Gharaibeh] and when it was time to announced the second season, we had him as one of our characters. As Maker grows and works with someone like Snoop, we get to have him in a video.

Epic Rap Battles became a really solid running back for the company. We can catch long balls. We’re reliable.

What do you have planned for season 3?

We’re committed to continue to delight people. A little staying the same, a little getting cooler.

How do you get cooler?

The people you work with.

So Justin Timberlake and Jay-Z?

Not that. It’s not about working with bigger people but excited, talented people.