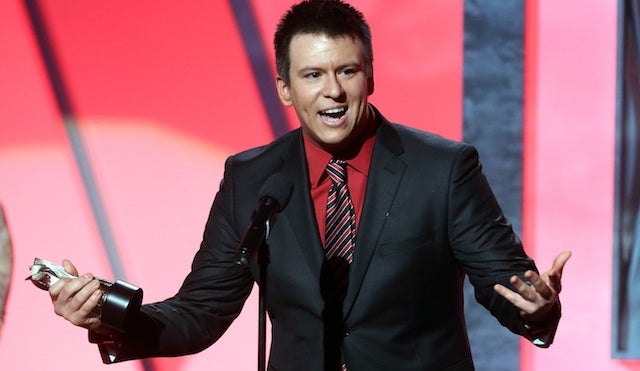 Philip DeFranco, one of the most prominent show hosts and producers on YouTube, has sold his network of channels to the Discovery-owned online video network Revision3, the company announced on Thursday.

DeFranco, who moved his family of networks to the Revision3 network one year ago Thursday, will join the company as senior vice president of the Phil DeFranco Networks and merchandise.

It’s a sign of how expansive DeFranco’s footprint has become in the YouTube community that he would assume an executive position at another company just for his network. The Bronx native started off as a vlogger, amassing an audience of millions of fans who came to see his regular commentaries on everything from the election to sex.

DeFranco then built out a network of channels under his name, including SourceFed, a news channel that was one of the initial round of channels funded by YouTube. It won the Audience Choice Award for Series of the Year at the 2013 Streamys.

“Phil knows better than anyone working the web today how to delight audiences, build passionate fanbases and launch new franchises,” Jim Louderback, CEO of Revision3, said in a statement. “By bringing Phil and DeFranco Creative officially into the fold we are adding a true pioneer in online video, a magnetic personality, a real business focus and a top-notch creative team to Revision3. His decision to join us validates Revision3 as the best (and only) place that supports and grows the Internet’s top video producers and hosts.”

DeFranco’s assorted channels now average about 50 million views a month, and, like many of the more prominent personalities on YouTube, he has established a secondary revenue stream through selling merchandise. In a blog post on his own site, DeFranco credited Revision3 for building out his business and promised his fans little change to his network.

“Revision 3 has been a fantastic sales and production partner throughout the years. Even more so after they were acquired by Discovery,” DeFranco wrote. “They took the properties I made and made them two to five times more profitable without having to alienate our existing audience.

“That’s why the next obvious step was for us to become one,” he added.