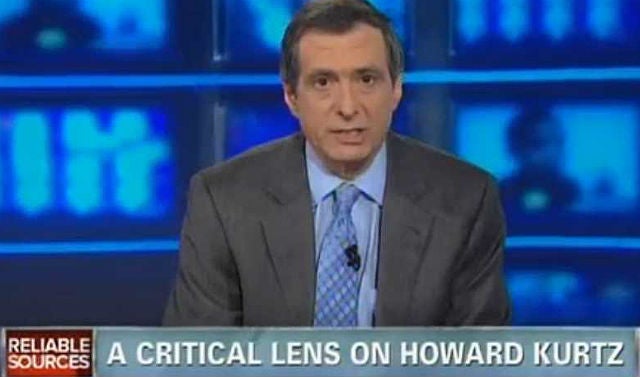 I wish I could say that Howard Kurtz's mea culpa on “Reliable Sources" was convincing. But it wasn’t.

Here are all my disclosures right up top: Howie is a friend and colleague of two decades. I have been a guest on his show many times. I gave him advice when he and Lauren Ashburn were starting the Daily Download. (My impression at the time was not that he was a mere adviser, but I'll leave that to him.)

So you will understand how painful it is for me to observe that his apologies during his show on Sunday seemed unconvincing.

At first it seemed that he was doing the right thing by being candid and contrite on his own show — that he'd say he was sorry, and that would set things right.

Instead, his apology and subsequent explanation laid bare a work process that is seriously not serious. His explanation of how he came to write an entire column based on the erroneous belief that Jason Collins had not acknowledged that he was once engaged was simply: I read too quickly.

He was a deer in the headlights when NPR's David Folkenflik accused him of being "sloppy and reckless" on many occasions. He offered no counter to the suggestion that he had been hasty and perhaps distracted when he previously misquoted Nancy Pelosi and misattributed an interview with a congressional spokesman to the congressman himself.

And most devastating, he had no answer to Politico's Dylan Byers, who asked why viewers should trust that he would tighten up his accuracy standards now, when he had already committed to doing so in the past.

His answer to the observation that he may have spread himself too thin was merely: "People will have to make their own judgment about that."

Is that where we've gotten to as journalists? That that's a good-enough excuse for one of the leading (I would argue the leading) media critic in the country?

As Kurtz himself said, he has to hew to a higher standard than that. Merely repeating an apology and stressing one's sincerity is not a ticket back to play on the journalism field.

Journalism isn't some kind of game where our errors skid past while we get to hold the rest of the world to account. It doesn't work like that. At least it shouldn’t.

We all make mistakes. God knows I have made them. Sometimes we make big ones. Mostly we pray that our editors catch them before they are displayed before the public. There probably isn't a journalist alive who hasn't owed his or her professional life to the sharp eye of a critical editor.

And beware of the web where any one of us can publish with the touch of a button.

My guess is that if Howie were still at the Washington Post, which has many layers of editors to keep mistakes big and small from reaching publication, none of this would have happened. (Not that it's a guarantee — paging Jayson Blair.)

But his recent errors date back to 2010, after he left the paper.

I have long admired Howie, and I hope to do so again. But here's the reality: The public trust is too precious and too fragile for us to look the other way when a colleague missteps in so fundamental a way.