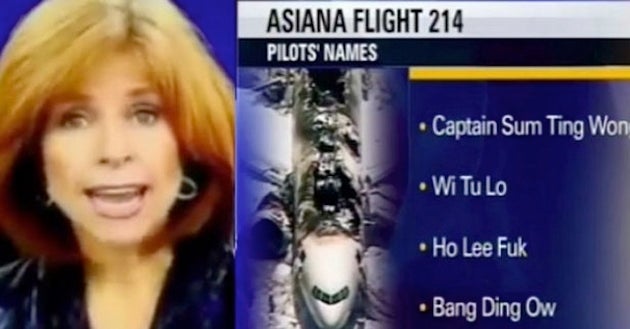 Three producers at the KTVU Fox affiliate in Oakland have lost their jobs over a racially offensive report of Asiana pilot names on a newscast about a crash landing that left three dead, and one of them insisted to TheWrap: “My hard-earned reputation is intack (sic).”

Reached by TheWrap via email, investigative projects producer Roland De Wolk wrote : “My hard-earned reputation is intack. There are lawyers, so eager as I am to anser all questions, I must refrain.”

“I’m at a point in my life where I’m looking for the next challenge, it’s just a question of where and what,” Belstock’s profile said.

KTVU has yet to identify the source of the four offensive names or explain how they came to be taken seriously enough to check with the National Transportation Safety Board, but apologized publicly afterward.

Cox Media Group spokesperson said that Cox, which owns KTVU, had no comment. KTVU vice president and general manager Tom Raponi also told TheWrap that he would not comment on personnel issues.

The NTSB then apologized, saying one of its interns wrongly confirmed the names. That intern was then let go.

De Wolk and Gastelu’s roles as investigative and project producers wouldn’t immediately suggest that they had much to do with a noon newscast. Belstock usually works on the evening newscast, an insider with knowledge of the situation told TheWrap. All three have been with the station for a long time: Gastelu joined in 1999, De Wolk in 1991 and Belstock in 2007.