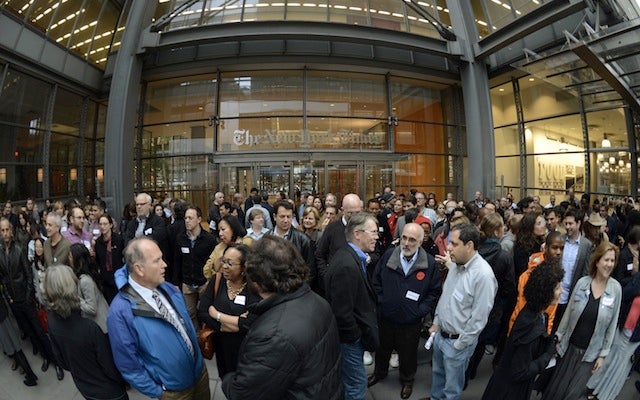 The New York Times said Monday that it hopes to slash 30 managers and nonunion employees and offered buyouts to newsroom employees, weeks after agreeing to a new contract with the Newspaper Guild.

The cuts would be the most extensive since the newsroom slashed 100 jobs in 2008. It also cut 20 jobs last year.

In a letter to the staff, executive editor Jill Abramson urged 30 managers who are not members of the union to accept severance packages and said the paper is cutting back on expenses, like leases on foreign and national bureaus, the Times reported.

Hiring on the digital side in recent years had replenished the newsroom staff to about 1,150 people — about as many as the Times employed in 2003. Abramson said the paper has trimmed more than 60 percent of its business side staff, recently offering 30 buyouts in the advertising department.

“There is no getting around the hard news that the size of the newsroom staff must be reduced,” Abramson wrote in the letter. “I hope the needed savings can be achieved through voluntary buyouts, but if not, I will be forced to go to layoffs among the excluded staff.”

At least one department was spared. Andrew Rosenthal, the editorial page editor, wrote in an email to the staff that "we, too, have made reductions to our expenses to meet our share of this burden, but we are not going to be offering buyouts in the Editorial Department at this time."

The Times ratified a new contract with its unionized employees last month after months of heated negotiations as guild members insisted on pay increases and preserved pension plans.

It remains unclear whether the cost of the new contracts prompted the job cuts. A Times spokeswoman told TheWrap that the newspaper's union requested that guild employees be able to apply for buyouts.

The Boston Globe, which is owned by the Times and is the flagship of its New England Media Group holding, offered more than 50 buyouts in July. Departure emails at the Boston paper trickled in to the company's mass inbox as recently as two weeks ago.

The buyout offers are valid until Jan. 24.