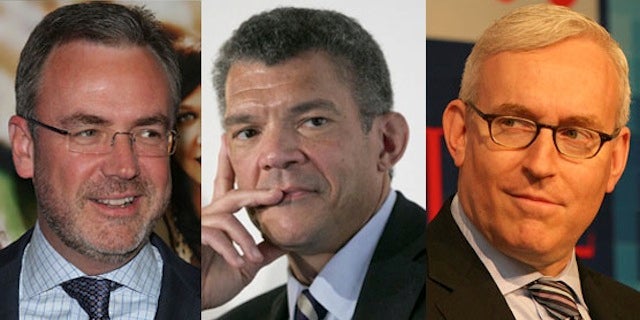 One of the biggest jobs in media is a new position and a high-risk opportunity: running Al Jazeera America.

The job running the Qatar-based network recently bought from Current TV has high visibility and no doubt a high salary attached. But it also bears the burden of building an audience in mainstream American with the name of a Middle Eastern brand unfamiliar to most U.S. viewers and probably off-putting to some.

TheWrap has learned of several of the candidates that Al Jazeera has contacted for a job that needs to start ASAP for the network to get on the air and running this year, as is planned. As it happens, there are a goodly number of experienced TV news professionals available at the moment. But who will it be? Also read: Are One of These the Next Al Jazeera America Chief (Photos)

According to those familiar with the recruiting process, the leading candidates include:

>> Former CNN President Jon Klein (at right in top photo). Klein, who was fired in 2010, has the news experience and is believed to want the job. According to an individual with knowledge of his thinking, Klein believes there is a ripe opportunity for a news network to occupy the niche that CNN used to — in other words, hard-core reporting with serious journalists. (Would it be cool for a Jewish guy to run an Arab-owned news network?)

>> Steve Capus, former NBC News president (above left, and at left in top photo). Capus has recently been shown the door by NBCU’s Steve Burke after nearly two decades with the network. He has the stature and the news chops for the job but is known to be skeptical about the opportunity, according to an individual close to him. Capus believes that Al Jazeera's reputation would be tough to overcome with the American public.

>> Mark Whitaker, former managing editor at CNN (center in top photo). Whitaker, a Harvard and Oxford University graduate and the former editor of Newsweek, has been out of a job since February and has just the kind of pedigree that the Gulf states seem to love. Still, ex-colleagues at CNN could never figure out what Whitaker did exactly, and his reputation on departure was as someone “aloof” and disconnected from the newsroom, according to one network veteran.

No offers have been made to any candidate, according to the knowledgeable individuals. A spokesperson for Al Jazeera America told TheWrap: “We do not comment on personnel rumors.”

Other candidates on most shortlists include: n advising the network but he is not interested in or being actively considered for the job.

>> Also not interested is MSNBC chief Phil Griffin, according to another knowledgeable insider. Griffin loves his gig at MSNBC and would not consider leaving for Al Jazeera.

>> David Bohrman, the former president of Current TV and a veteran of CNN, would seem to be a logical candidate since he ran Current, bought by Al Jazeera. One insider told TheWrap that Bohrman was out of the running but did not have further details.

>> Alexandra Wallace (below), the only female in the bunch, produces NBC’s Nightly News with Brian Williams. Her interest is not known at this point. >> David Doss, former producer of Anderson Cooper’s nightly newscast on CNN, is a well-respected news producer but has been deemed not “mature” enough for the leadership role, according to the knowledgeable insider.

>> Andrew Heyward (below), the former president of CBS News, makes the shortlist, but his interest in the job is not known.

Al Jazeera bought the Current network from Al Gore and Joel Hyatt in January 2013 for a reported $500 million, and has announced little about precisely what news strategy it intends to pursue, saying only it will launch this year. The network declined to talk to TheWrap for this story.

Given the heated competition among MSNBC, CNN, Fox and the broadcast news operations, Al Jazeera will certainly want to target a particular niche on the cable landscape. Tthere are signs that the network intends to take on serious reporting and will follow the populist line that made it a household name and must-see in the political hotbed of the Middle East.

The network announced on Thursday plans to open a Detroit bureau and “focus on telling the stories of the people of Detroit and how news in Detroit affects those across the U.S.,” according to the news release.

The network is also offering a New York internship to a Detroit journalism student, apparently its equivalent of economic affirmative action.

Other bureaus will include Chicago, but that’s just about all they’ve announced, along with the hire of CNN anchor Ali Velshi.

Al Jazeera is the first English-language television network based in the tiny, oil-rich emirate of Qatar. Launched in 2006, it is owned by the Al Jazeera Media Network. Al Jazeera is available worldwide, and as of 2011 was no longer owned by the government.

The Arabic network is currently only available in New York and Washington. Al Jazeera English, the sister channel, can also be seen in Los Angeles. Programs range from "’People & Power," a “groundbreaking investigative programme," which looks at the use and abuse of power,” to "Witness," a show that focuses on “courageous and inspiring human stories.”