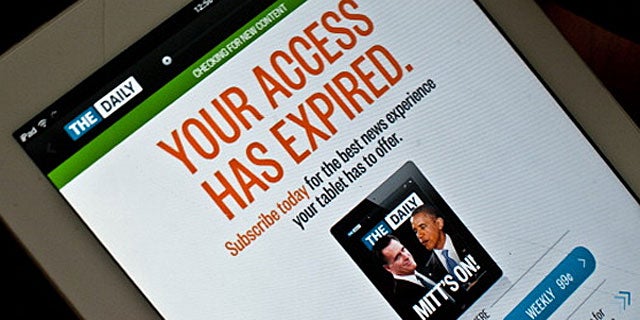 The demise of Rupert Murdoch’s “The Daily” says as much about the unforgiving state of digital journalism as it does about the iPad-only news daily Murdoch launched less than two years ago.

So it does. It just doesn’t demand the kind of journalism done by The Daily: general news, updated once a day, offered on a single platform, with beautiful graphics, available by subscription only.

We’ll get back to that, but first — The Daily suffered from other problems, to be sure. According to insiders at the publication, it had a content system that loaded too slowly and that frequently crashed in the middle of an article. Worse, it was designed so readers could only access articles on the day they were published.

“It was up for 24 hours and gone,” one insider, who declined to be identified, told TheWrap. “There was no way for a reader to read a story from the day earlier unless you saved it. It was a huge frustration for readers as well as for those of us who were writing it when you realized no one will see it again after midnight.”

With an investment in the tens of millions of dollars and 100 employees at its height, The Daily was a bold move by Murdoch (above), one of the few media visionaries with the guts to make big bets and risk the consequences. He has lost before, with MySpace. But he has won before too, as with Fox News.

But this particular investment in The Daily smacked more of infatuation with technology’s latest media tool — Steve Jobs’ versatile tablet — than with vision. Murdoch chose to launch an entirely new brand, with a full editorial and business staff, for a single platform, instead of branching off an iPad version of one of his existing publications.

Was The Daily a digital-age indulgence by Murdoch?

"It felt like the kind of venture that started when a very senior executive gets his new iPad for Christmas, and he has the power and the money to do something bold, but there's not practicality in it," said Elizabeth Osder, a veteran media consultant. "This was a bold move, an emotional move, but not a prudent business move."

The Daily never reached much beyond 100,000 subscribers. It joins the ranks of Inside.com and Talk magazine, interesting publications that never got over the business bar of critical mass.

Richard Wald, a professor at Columbia Journalism School, said the failure of the Daily will drive media executives away from single-platform publications in the future.

"Entrepreneurs will not try to do something that's restricted to one platform," Wald told TheWrap. "[The Daily's] problem was it looked very inviting to create something that would look good — and it did look good — on an iPad. But the tablet market is still not of the size to be a main distributor."

Bill Grueskin, another Columbia Journalism School professor and a former editor at the Wall Street Journal, told TheWrap that the Daily's main problem was that its editorial voice was not unique enough.

"It wasn't ESPN, it wasn't the Financial Times, it wasn't Entertainment Weekly," he said. "It was a little bit of each of those, and the problem with being any of those is that you're not the main source for that information."

In the end, The Daily was competing with the slick commentary of The Daily Beast and the raucous news-making machine that is The Huffington Post, without giving readers a compelling reason to pay for The Daily after all that free content.

Someday there will undoubtedly be a tablet-only daily news publication. It just won’t be The Daily.