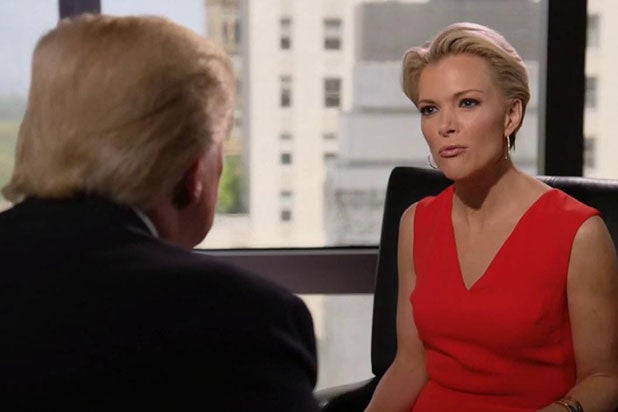 “Megyn Kelly Presents” averaged 4.7 million viewers on Tuesday night, but based on the reviews, the majority of them may have been disappointed.

“Last night brought the no-news interview and an unabashed promotion for what she disclosed (lucky viewers) would be an upcoming autobiography, including her year of ‘torment’ with Trump,” Vanity Fair’s James Warren wrote, while Los Angeles Times’ Mary McNamara said Kelly only “invited [Trump] to costar in an hourlong infomercial for her new book.”

The reviews for the primetime special, and an unimpressive rating in the coveted 18-49 viewer demographic, won’t help Kelly on what appears to be an effort to become the next Barbara Walters, who retired from TV journalism two years ago.

However, there were some positive reviews. Lloyd Grove from The Daily Beast stated Kelly “did not disappoint” in her interview with Donald Trump. And Daniel D’Addario’s review for Time was mixed, claiming that the interview “was a signpost of her ambition, and a signal that she has the raw skill to carry out whatever may come after Fox News.”

“Liberated from the tight time constraints of cable news, Kelly relaxed into her role as heir to Barbara Walters,” TVNewser‘s Mark Joyella wrote. “She also used silence to great effect, letting moments hang to let them breathe-and to see what would happen.”

Read 7 of the worst reviews below.

“Greeting her viewers from what appeared to be the bridge of a spaceship made of nutrition-free marshmallow, Fox News Channel’s Megyn Kelly made an awkward and unimpressive landing with her first hour-long interview special Tuesday night on the Fox network. ‘Let’s just dive right in,’ she said, and then proceeded to never dive into much of anything, even during her ultra-hyped interview with Donald Trump, the presumed Republican presidential nominee.”

“After the weeks of hype and the queasy hopes of an anxious nation, it all became clear: Megyn Kelly didn’t ask Donald Trump to headline her Fox special ‘Megyn Kelly Presents’ so she could pin him down on foreign and domestic policy issues, or even confront him about the months-long troll attack he launched after she dared question him during the first Republican debate about his penchant for misogynistic language.  No, she invited him to costar in an hourlong infomercial for her new book.”

“Tuesday night, when Fox broadcast Kelly’s interview with Trump, there seemed to be a truce, but no new information. Trump didn’t actually apologize for anything he’s done or said, and Kelly didn’t push him too hard on anything. You could view it as a bit of a letdown after all the drama between the two.”

“In keeping with the conventions of primetime interviews, though, Kelly kept the conversation personal, not political. In fact, there wasn’t a single policy question, or even anything close to one; rather, the Trump talk ranged from potential regrets about things he’s said or done during the campaign to failed marriages to the death of his older brother.”

“For all the disgusting insults Donald Trump has lobbed at Fox News Channel anchor Megyn Kelly–from retweeting someone calling her a bimbo, to implying she was on her period while moderating a debate–even the most naïve observer of politics and media in the Age of Trump must have known that Tuesday night was inevitable. And by ‘Tuesday night,’ I don’t just mean a television special–this particular one on the Fox broadcast network, and moderated by Kelly with Trump as her star guest. Equally preordained was the fact that, at a time when Rupert Murdoch, Roger Ailes, and most of the Fox News Channel have made their peace with Trump, Kelly would eventually conduct a fawning, boring, and pointless interview with the presumptive Republican nominee.”

“The special was haunted by a sense that perhaps she went too big and broad too fast. Four interview subjects in an hour that includes the standard ad-breaks is a lot, even for the most gifted of interviewers. Segments were edited together in a manner that brought to mind a businesslike brusqueness: A segment with Robert Shapiro, a member of O.J. Simpson’s ‘Dream Team,’ rushed from questions about Shapiro’s experience of the Simpson trial to the untimely death of his son so quickly that this viewer felt disoriented. And the line of questioning to Laverne Cox about her suicide attempt came so early in the interview that most viewers were likely still figuring out who Cox was when the actress said, ‘I didn’t think you’d be going there!'”

“At minimum, the soft-as-a-grape session on the Fox broadcast network climaxed one of the more impressive acts of self-and corporate promotion in recent times. You remember the tumultuous Fox News debate, her seemingly steely questions about his misogyny, the nasty Trump responses, his faux boycott of Fox News, and the Trump back-and-forth with Fox guru Roger Ailes? It seems so very long ago. Then came the Kelly crosstown Manhattan pilgrimage to Trump Tower, the wink-wink hint of a detente and, then, bingo, announcement that he’d surface for her first big Barbara Walters-like celebrity special. Last night brought the no-news interview and an unabashed promotion for what she disclosed (lucky viewers) would be an upcoming autobiography, including her year of ‘torment’ with Trump!”