Nearly 10 months after NBC lured Megyn Kelly from Fox News with great fanfare — and a reported $15 million-plus paycheck — the veteran primetime cable host is set to launch her new morning show this Monday, taking over the 9 a.m. hour of “Today.”

Though the first two hours of “Today” is a demo ratings-dominating cash cow — ABC’s “Good Morning America” claims more total viewers — the third hour faces more, and more-varied, competition. It also has a bit of an identity issue — even Hour 4 is well known for the off-script and oft-buzzed antics of hosts Hoda Kotb and Kathie Lee Gifford.

Hour 3 is kind of just there. And now Megyn Kelly is, too. Below are some of the challenges facing Fox News’ formerly biggest star.

Unlike the first two hours of “Today,” Kelly’s show will have a different studio, a studio audience and its own logo — though that last one will incorporate “Today’s” sunrise art.

“We are formally embedded in the family,” Jackie Levin, the producer of the new show, told TheWrap. “You will absolutely know that we are all the ‘Today’ show. Our hour will have its own personality, you know, like Hoda and Kathie Lee.”

“It’s nothing we want to fight,” she continued. “This is a legacy brand.”

So what will Kelly’s take consist of? It will still be topical, of course, with news and interviews, as well as taped packages. There will be celebrities and slice-of-life stories highlighting “real” people.

Kelly has personally qualified her “Today” hour as a hybrid of a typical morning show and talk show. First- and second -week guests include the casts of NBC’s “Will & Grace” and “This Is Us,” Robert Redford and Jane Fonda, the women of “SNL,” Morgan Freeman and Russell Brand.

Most viewers know Kelly from her seven years at Fox News as a sometimes combative interviewer — or from the notorious 2015 GOP presidential primary debate where she challenged then-candidate Donald Trump on his attitudes toward women.

But that sort of tough-as-nails approach is a rarity on morning TV — when the audience skews both younger and more female than her “The Kelly File” at 9 p.m. on Fox News.

Kelly and Levin have insisted that the new show will focus on the host’s lighter side. “She’s is very, very funny. Very fast on her feet,” Levin said. “Tells a good story, has a good hearty laugh and is not afraid to poke fun of herself. She’s a very… balanced person in that respect.”

Still, “Ellen” and “Dr. Phil” are not typically direct time slot competitors in most markets.

The story hasn’t been much better when isolating the top four TV markets in the U.S. — where the existing “Today” at 9 a.m. trailed Kelly Ripa and Ryan Seacrest’s “Live” throughout the same hour by as much as 2-to-1 last week. 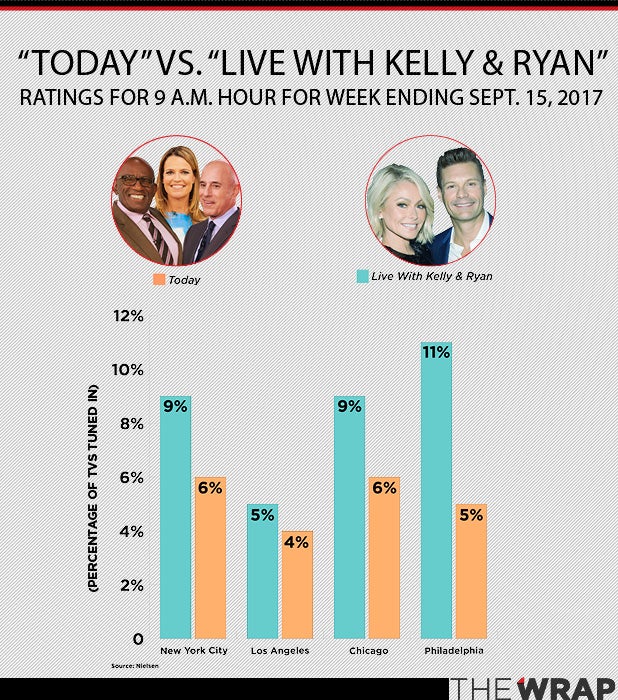 So yeah, Kelly inherits a time slot where the network has a little catching up to do.

Also Read: Megyn Kelly's NBC Primetime Summer Run Is Over - So, How'd She Do?

Another potential worry for the network: Kelly didn’t exactly shake up the primetime ratings leaderboard this summer when her “Sunday Night” newsmagazine show launched in June.

While Kelly’s primetime ratings weren’t exactly “This Is Us” figures, she still bested the 3.16 million total viewers that “Dateline NBC” averaged in summer 2015. (We’ll set aside 2016’s 3.77 million because of the boost from the Rio Olympics.)

And Kelly scored some individual highlights, including that Putin interview and her polarizing profile of InfoWars conspiracy theorist Alex Jones (though that sure didn’t go over well with everyone).

“I feel that if you watched [‘Sunday Night’], you would see really good, smart journalism,” Levin said. “I thought it was a fantastic show.”