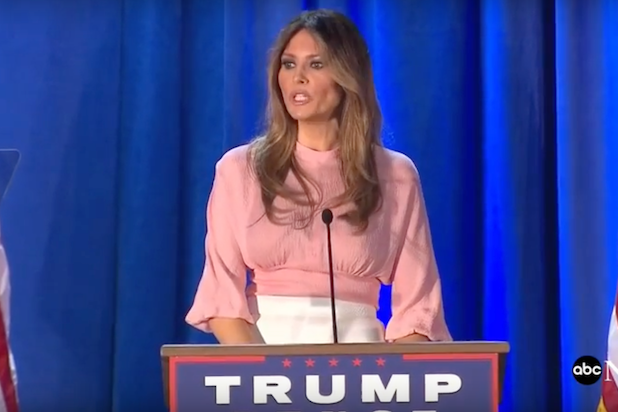 Melania Trump made a much talked-about speech condemning cyberbullying on Thursday, but apparently some of it had been said before — by Marla Maples.

Yair Rosenberg, a senior writer for Tablet Magazine, tweeted that Melania had lifted the phrase “if you could dream it, you could become it” from an old interview with Donald’s second spouse, as both Mrs. Trumps misquoted a similar famous saying, he said, citing another Twitter user.

Medieval literary historian & connoisseur of misquotes @yonibrander explains why Melania mangling the famous quote shows where she got it: pic.twitter.com/xfl5rJo4cC

“If you can imagine it, you can achieve it. If you can dream it, you can become it,” is a much-repeated quote from writer William Arthur Ward, who died in 1994.

“If you can dream it, you can do it,” is another version that is often attributed to Walt Disney, but that is reportedly a misquote, and it was actually written specifically for the Horizons ride at Epcot.

Melania had used Marla’s version to describe growing up in Slovenia and her dreams of moving to the promised land of America while addressing Trump supporters in Berwyn, Pennsylvania.

See video of Melania’s latest speech faux pas from The Washington Post below.