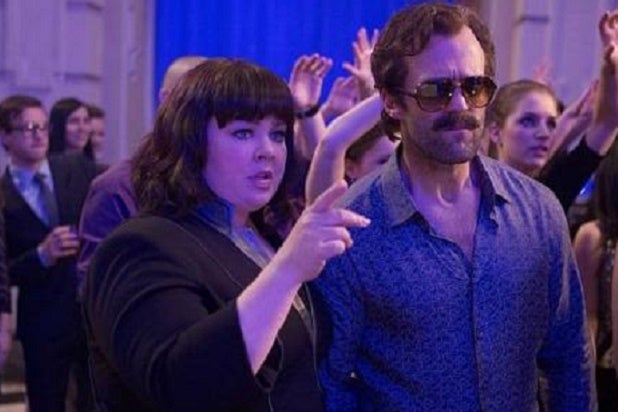 The debut for “Spy” was enough to hold off Dwayne “The Rock” Johnson’s disaster saga, which was second with $26.4 million, third-place which scared up $23 million and “Entourage,” which debuted with $17.8 million for five days.

McCarthy’s “Spy” opening is better than that of “Tammy,” her last starring role which opened to $21.5 million last July, and “Bridesmaids,” which debuted with $26 million in May of 2011, but it didn’t bring the heat of “The Heat,” her buddy cop comedy with Sandra Bullock. That one was also directed by Paul Feig, produced by Chernin Entertainment and distributed by Fox like “Spy,” and opened to $39 million in June of 2013.

“San Andreas” and this weekend’s two wide openers — the first release of Focus Features’ niche label Gramercy Pictures, “Insidious 3,” and Warner Bros.’ “Entourage” — delivered as expected. But with “Spy” coming in under the $35 million projections of analysts, the overall weekend was down from last year for the third consecutive week, this time by 17 percent.

It’s probably nothing that Universal’s “Jurassic World” — which is expected to top $100 million when it debuts Friday — won’t cure, but this wasn’t the sort of weekend that will help 2015 break a summer record, as many analysts believe it will.

Still, no one at Fox was too worried about “Spy.” It added $26 million from abroad, which means that globally it’s less than $10 million away from its $65 million production budget in its first three days.

“There’s never a replacement for a great comedy, and I think that’s what we have here,” said Chris Aronson, Fox’s distribution chief. “One of the reasons we moved to this date (from the Memorial Day weekend) was to take advantage of the mid-week days now that school is out and the coming weeks, and I think Melissa and Paul have put us in a great position to do that.”

McCarthy’s movies typically have strong legs and “Spy,” which co-stars Jason Statham and Jude Law, is very well-reviewed and at 95 percent positive on Rotten Tomatoes. The audience — which broke down 60 percent female and 65 percent over the age of 25 — gave the comedy a “B+” CinemaScore.

“Insidious 3” was nearly a win going in because of its under-$5 million budget. It was No. 1 ahead of “Spy” on Friday — and an audience dominated by young women and Hispanics is a winning strategy that Blumhouse Productions has employed repeatedly to score with horror hits, and it worked again.

The audience was 54 percent female and nearly 70 percent under the age of 25, and they gave the film a solid “B+” CinemaScore. Horror fans are notoriously hard graders and it’s at a decent 59 percent positive on Rotten Tomatoes, so it could break the pattern of most genre offerings and not drop off the table next week.

Leigh Whannell wrote and directed this installment after writing the first two films, which were directed by his pal James Wan, who is producing with Oren Peli and Blum. Dermot Mulroney, Stefanie Scott and horror veteran Lin Shaye co-star along with Whannell.

“Entourage” looks like it will eventually be a financial winner for Warner Bros., given its modest $27 million budget and synergy with Time Warner c0rportate sibling HBO, but it took a late rally Saturday to get it there.

The “Entourage” audience was dominated by the East Coast from Wednesday, when it opened, and it looked as if the tracking was on the money with its $15 million projection for the five days.

“We’re very pleased that we finally got the West Coast audiences to wake up,” said Dan Fellman, Warner Bros. domestic distribution head. It did and, with four of the five highest-grossing theaters in L.A. and San Francisco, Saturday was up three percent from Friday. That was critical to its success, since writer-director Doug Ellin’s free-wheeling take on life in Hollywood was never going to do big business in the South and the Heartland.

Also Read: Why 'Entourage' May Find Itself Outside the Velvet Rope at Box Office

Audiences were predictably 64 percent male for the tale of super agent Ari Gold’s (Jeremy Piven) transition into a studio chief, and the directing debut of actor Vinny Chase (Adrien Grenier), who had his posse of pals in tow. Ensemble members Kevin Connolly, Jerry Ferrara and Kevin Dillon of the TV show returned, with Billy Bob Thornton and Haley Joel Osment joining the cast.

Moviegoers liked it more than critics, who have it at 29 percent on Rotten Tomatoes, and awarded it an “A-” CinemaScore.

Warner Bros. can also celebrate “Mad Max: Fury Road,” a co-production with Village Roadshow, which crossed has crossed $300 million at the worldwide box office on Saturday.

Written and directed by George Miller, the action extravaganza starring Tom Hardy and Charlize Theron was fifth with $8.1 million in its fourth weekend. It’s held well throughout its domestic run, and is up to $130 million. But overseas is the key to profitability for the $150 million production.

The fortunes of the R-rated road rage romp “Mad Max” have been tied to “Pitch Perfect 2, Universal’s musical comedy starring Rebel Wilson and Anna Kendrick, since they opened against each other on May 15.

“Pitch Perfect 2” is up to $160 million domestically after the PG-13-rated comedy written by Kay Cannon and directed and co-produced by Elizabeth Banks finished sixth with $7.7 million.

“Tomorrowland,” the Brad Bird-directed sci-fi adventure starring George Clooney, was seventh with $7.3 million for the weekend. That will put the domestic total for “Tomorrowland” at around $77 million, and its worldwide haul at roughly $150 million.

“Aloha,” the romantic comedy written and directed by Cameron Crowe and starring Bradley Cooper and Emma Stone, continued to underachieve for Sony. It took in $3.3 million  — a steep 66 percent drop from its soft opening last weekend — and to finish ninth.

“Love and Mercy,” a low-budget biopic about the Beach Boys’ Brian Wilson, finished just outside the top 10 with $2.2 million for Roadside Attractions and Lionsgate. Paul Dano plays Wilson in his early years and John Cusack plays him when he’s older in the PG-13-rated film directed by Bill Pohlad. Elizabeth Banks and Paul Giamatti co-star.