George Clooney staring intensely at a goat — and willing it to die — should be funny, right?

I mean, in a movie, not real life.

There he is — in the self-explanatorily titled “The Men Who Stare at Goats” – eyes narrowed, as he tries to kill a tethered critter with his mind. Here’s man and beast united in a spaghetti western confrontation. Watching this, we should be falling about. So why aren’t we? 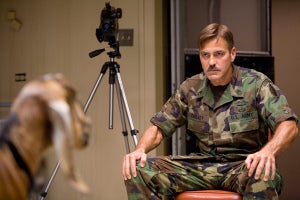 I believe it’s the corn.

I believe corn has become the bane of our food supply — and our brains. If you’re with me on this, we’ll connect this terrible development to bad satire. And we’ll touch upon “Dr. Strangelove” and the documentary “Food Inc.” on the way.

If you watch the informative documentary “Food Inc.,” you’ll see that just about everything that flows into our brains comes from corn. Mush in our hamburgers and virtually all foods. Corn syrup in our sodas. Even our meat eats corn mush.

The food industry, bent on profit, feeds corn mush now to our cattle. And corn mush to our chickens. That means corn in our burgers, hot dogs, chicken salad, eggs, you name it.

The movie shows you how the chickens are so undernourished by this Brave New Diet, they can’t even stand on their legs. They just lie there like those slobs wallowing poolside in “Wall-E.”

“Goats” — the movie, based on Jon Ronson’s 2004 nonfiction book — reflects our corn-fueled mediocracy of the moment: a pop culture that’s all sweet, all bland, all the time. We’re so conditioned to blandness and sweetness everywhere, it stands to reason we ask for it in our comedy, too.

When it comes to casting, “Goats” packs in the sucrose: Lovable George, who has the left-wing version of the frat-boy smirk that got George Bush elected for two terms. Jeff Bridges, who was so effortlessly funny in “The Big Lebowski.” Ewan McGregor, the young Obi Wan Kenobi of the “Star Wars” franchise.

Set in Iraq circa 2003, the movie follows a newspaper reporter, Bob Wilton (McGregor), as he goes to the war zone in search of a good story. He discovers Lyn Casady (Clooney), a self-described “Jedi” who believes he has mind-reading powers and a special technique called “sparkly eyes.”

Little by little, Wilton learns about the military program of yore that trained Lyn, and its creator, a flower-powery, outside-the-box thinker named Django (Bridges) who hands flowers to his boot-camp soldiers.

Sweet! We want to find the movie funny already. And yet, most of the time, we feel as if we’re in one of those uncomfortable situations in which a friend (in this case, a Big Screen Friend like Clooney) is telling us an unfunny joke and we’re duty-bound to laugh.

You’d think this project would be foolproof, judging from the source material. Ronson’s book detailed a series of real military R&D programs that advocated turning soldiers into holistic “warrior monks” capable of telepathy, psychokinesis and teleportation.

When I watched Clooney stare at that goat, I thought about how we’ve all slipped down the Darwin ladder a rung or two. The same mush that feeds these two opponents feeds the filmmakers, too. Feeds us, too.

They — and we — think anything’s funny, if it’s sweet enough. And without noticing it, humankind slips a ring or two on the unforgiving Darwin ladder.

Back in the 1960s, Stanley Kubrick and Terry Southern created a bleak-comedy masterpiece called “Dr. Strangelove” by focusing squarely — and without reaching for cheap laughs — on the very real notion of the world’s mutually assured destruction. All they needed to do was twist one teeny tiny little bit, and the result was hysterical. But “Goats,” even though it tries to be deadpan, is too tickled with itself to work.

If you can Netflix or YouTube it — and don’t U love life’s gnu new postmodern verbs? — there’s a 1974 Italian comedy called “Bread and Chocolate” set among the migrant worker population of Naples. And there’s a hilarious scene in which the central character stumbles into a henhouse, to meet an entire community of impoverished immigrant workers who collect eggs and are forced to live among the chickens. One of the henhouse dwellers (whose pointed face and nose suggest a chicken) starts doing chicken imitations. And all the others join in — a bunch of men and women buk-buk-beKAP’ing away. It’s as terrifying as it is hilarious. And it seems to herald what we are becoming.

Please start eating grass-fed beef, if you are a meat eater. Watch the corn in your life. Get your brain back. Throw out the soda. Demand your congressmen and congresswomen stop catering to the food industry’s corn programs.

And if you’re looking for funny, check out films made in the pre-corn era. Like “Bread and Chocolate.”