The tributes to country music legend Merle Haggard, who died Wednesday on his 79th birthday, have been flooding in, with colleagues such as Dolly Parton, Willie Nelson, Tanya Tucker and Hank Williams Jr. offering their thoughts, remembrances and condolences.

Nelson posted a photo of himself with Haggard on Twitter, accompanied by the caption, “He was my brother, my friend. I will miss him.”

Echoing the sentiments of many, Parton called Haggard “one of the greatest writers and singers of all time.”

Also Read: How Merle Haggard Once Saved Willie Nelson From a Pot-Free Bus

“We’ve lost one of the greatest writers and singers of all time. His heart was as tender as his love ballads,” Parton said in a statement. “I loved him like a brother. Rest easy, Merle.”

Tanya Tucker recalled both her professional and private time with Haggard.

“We’ve lost another hero. Now he doesn’t have to be in pain anymore. I know he’s not suffering anymore. I just can’t imagine a world without Merle. It’s so hard to accept, but I’ll continue honoring him on stage just as I do during every show,” Tucker said in a statement. “We played a lot of gigs together through the years, but some of my fondest memories were hanging out in a natural setting, like the time we sat there by the river in his backyard and ate bologna sandwiches. Merle was a simple man with incredible talent like no other. And now he’s up there singing with George [Jones] and all the angels. Love you, Merle.”

“Not just a singer, not just a songwriter, not just another famous performer. He was your everyday working man. I remember when I was 15 years old on tour with Waylon Jennings and Merle Haggard,” Williams recalled. “They both were wondering which one of the two was going to make it. Well, they both made it. Today, ole Merle joined Waylon, George, and daddy to sing in the Heavenly choir.”

Kesha — who suffered a dramatic setback in her legal battle with producer Dr. Luke on Wednesday — revealed an unusual connection to the singer.

Posting on Instagram, the “Tik Tok” singer noted that her mother, Patricia Rose Sebert, had penned a song that Haggard covered.

“So sad to lose one of the greatest American singer-songwriters of our time. Merle Haggard was an outlaw and a poet and a storytelling genius,” Kesha wrote. “One of the few songs he ever recorded that he didn’t write was one of my mom’s songs, ‘Old Flames Can’t Hold A Candle To You.’Tthat’s the first time I heard about him, from my mom. He will be missed.”??'”

Read on for more tributes to Haggard.

Today country music lost a legend. Merle Haggard was truly one of the great singer/songwriters of my generation. I will miss him.

Merle Haggard. The man , the songs , the voice, the attitude – Iconic. pic.twitter.com/yvykBkUdUn 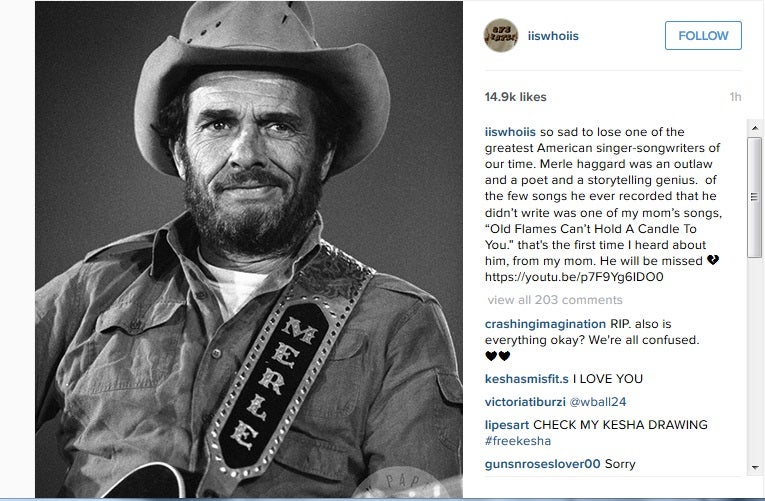 Heaven’s band just got better! RIP to the LEGENDARY @merlehaggard. Your music will never die!

Our thoughts and prayers with @merlehaggard‘s family. Thankful for all he did for country music. #legend pic.twitter.com/BVTADpPiRp

In mourning for my friend Merle Haggard. There’s never been anyone quite like him. May he rest in peace. #RIPMerle pic.twitter.com/NkLWtrXkXV

RIP @merlehaggard I had privilege of acting w/him. A fun & gracious man who always had a mandolin or guitar near by https://t.co/zilPAeSj4E

A true hero was lost today. Thank you for your contribution to not only country music but all music. @merlehaggard

We’ve lost a true California renegade. When Merle Haggard visited me at the Capitol, I was the fan & he was the star. Thinking of his family

MERLE HAGGARD YOU HAVE WORSE NAME BUT GOD BLESS YOU FOREVER YOU MAKE THE BEST MUSIC.

Merle Haggard sang & wrote the very 1st songs that ALABAMA played in public, “Sing Me Back Home” & “Silver Wings” To the group ALABAMA…