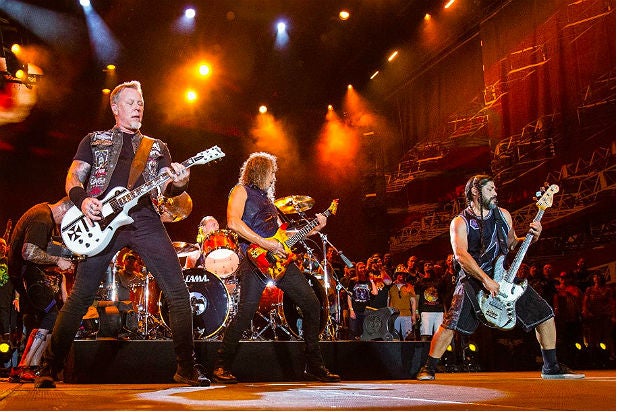 But after dark it was all about the music as Metallica provided a fitting soundtrack to the adrenalin-fueled event.

The veteran rockers, who first formed in 1981, blasted out a two-hour set to over 30,000 people packed around the Super Stage at the Circuit of Americas — with many even on the stage — Saturday night as frontman James Hetfield told the crowd that a number of the X Games athletes use Metallica songs to get amped up before they compete.

The nine-time Grammy winners played classics including “Fuel,” “Enter Sandman” and “Master of Puppets” during their energized set, which even sparked a mosh pit in the VIP section.

Earlier in the day, the legendary rockers did a six-string salute to America with an instrumental version of “The Star-Spangled Banner.”

On Friday night, it was fellow Grammy winner Nicki Minaj‘s job to entertain the masses on the Super Stage, as she rocked out in skin-tight checkered flag patterned lycra.

The real stars however were the extreme athletes such as GoPro BMX Big Air gold medal winner Colton Satterfield, who perfected mind-blowing tricks after dropping in off a 65-foot ramp and flying up the 27-foot quarterpipe. Some riders weren’t so fortunate, with many suffering bone-crunching falls and Chad Kagy even being rushed to hospital.

Over on the racetrack, there was even more carnage during the Red Bull Global Rallycross, as pieces of modified Volkswagens and Ford Fiestas boasting 600 horsepower flew around the dirt track and bounced over jumps. Scott Speed once again took the gold medal in his souped-up Beetle, which lost much of its body shell along the way.

The competitions concluded on Sunday night when after multiple hair-raising crashes in the Toyota Moto X QuarterPipe, France’s Thomas Pagès took the gold with a gravity-defying bike flip.

Airing on ESPN and ABC, the event first launched in 1995 in Providence, Rhode Island. After being held in Los Angeles from 2003, the X Games headed to Austin in 2014 with Kanye West and the Flaming Lips opening the inaugural weekend.

In addition to ESPN’s U.S.-based media platforms, X Games Austin is televised and syndicated in more than 215 countries and in over 439 million homes worldwide.

See video below of Metallica performing the national anthem.