Bringing you the latest from fan sites around the Web: 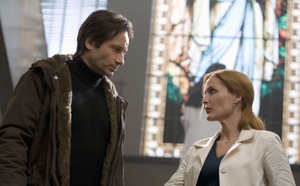 The spooky posters of "The X-Files: I Want To Believe," opening on Friday, have intrigued me, even if I’ve never been a fan of the cult TV show. But perhaps thimgs were better left under wraps. Ain’t It Cool News’ Latauro calls the film "one of the most passionless affairs I’ve seen on the big screen in a while," saying that the lack of moral conflict or supernatural mystique that defined the series nearly put him to sleep. AICN commenters didn’t like it either.

Sacha Baron Cohen has nothing left to prove in the comedy world, having played French, Italian, and Austrian characters with panache…Joblo.com says he’s signed onto a film titled "Accidentes" with Fox Atomic. He’ll produce the film and may well end up playing the lead role of Latino attorney. Personally, I’m still waiting for him to take on a dramatic role. He has the dedication of a Daniel Day-Lewis. Does he have the acting ability?  – MG