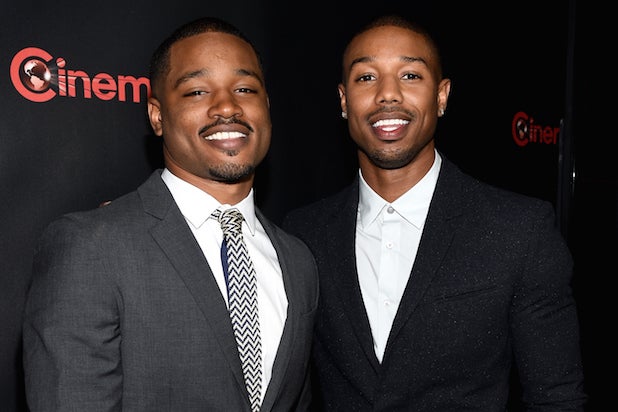 LAS VEGAS, NV - APRIL 21: Director Ryan Coogler and actor Michael B. Jordan attend Warner Bros. Pictures Invites You to ¬ìThe Big Picture¬î, an Exclusive Presentation Highlighting the Summer of 2015 and Beyond at The Colosseum at Caesars Palace during CinemaCon, the official convention of the National Association of Theatre Owners, on April 21, 2015 in Las Vegas, Nevada. (Photo by Michael Buckner/Getty Images for CinemaCon)

After working together on “Fruitvale Station” and “Creed,” Michael B. Jordan and director Ryan Coogler are planning to reunite for “Wrong Answer,” a movie about the standardized-test cheating scandal that rocked Atlanta’s education system in 2013, reports the New York Times.

The project is in the early stages so details remain thin, but according to the Times, Jordan will turn his attention to “Wrong Answer” after he plays real-life lawyer Bryan Stevenson in “Just Mercy,” a drama that Destin Daniel Cretton (“Short Term 12”) will direct for Broad Green Pictures.

Back in 2013, 12 Atlanta educators — including five teachers and a principal — were indicted following years of suspicion regarding how Atlanta students had improved their scores on the Criterion-Referenced Competency Test, which is administered throughout the state of Georgia.

Questions arose after the Atlanta Journal-Constitution began publishing a series of articles in 2009 about the veracity of standardized test scores, which prompted Governor Sonny Perdue to open an official inquiry. Two years later, the investigation found that cheating had occurred in at least 44 schools and that one of Georgia’s major school districts had been plagued by “organized and systemic misconduct.”

Jordan will play an Atlanta schoolteacher caught up in the scandal, according to the Times.

“I’m just trying to shine lights on little situations that I feel are the problem, and telling it through art,” Jordan told the Times. “I think that’s my part. To have people receive something that inspires thought, and conversation, and maybe you can change the way someone thinks. I think that’s where it starts. If you can change the way you think, the way you receive somebody, and not be intimidated by the way they look, or the color of their skin, or what they have on, it’s a step.”

Jordan recently played the Human Torch in the “Fantastic Four” reboot and he next stars as Apollo Creed’s son, Adonis, in Coogler’s “Creed,” which New Line will release next month. He’s repped by WME.