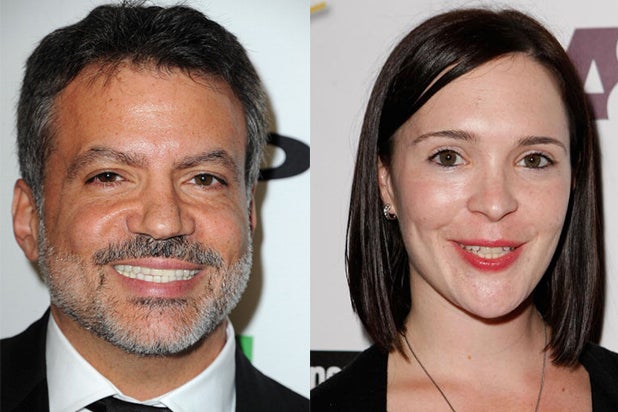 Since the appointment of Michael De Luca as co-president of production at Sony’s Columbia Pictures in December, rumors have been rampant in Hollywood about why he took the job in partnership with Hannah Minghella. More recently, agents, producers and studio insiders have told TheWrap that the creative community is confused about how the partnership will work. In the wake of these questions, De Luca and Minghella agreed to speak with TheWrap exclusively about the inner-workings of their partnership and what Hollywood can expect going forward.

TheWrap: Is there tension between you two now that Mike is sharing same title as Hannah?
Michael De Luca: Just sexual tension (laughing).
Hannah Minghella: We’re hugging.
MDL: The answer is, ‘No, there isn’t.’

Some in the creative community seem confused as to to whom they should be bringing material. Is that understandable?
HM: Both Mike and I feel that we haven’t had a chance to communicate to the community at large how our partnership is going to work, so of course we understand that people might have questions or speculation about that. We only just last week sat down with our staff to go through all of the projects with them. So this is a transition and it’s happening at its own organic pace.

What message are you looking to convey?
MDL: There are going to be relationships that I have where some material will organically come to me and there will be relationships that Hannah has where some material will organically come to her, and there may be things that because of the pedigree or whatever, that might come to the both of us. We’ve already heard things together. I think it’s something that works itself out in the wash as we proceed, but it’s wherever somebody feels that they have the most connection.

HM: Mike and I will together run the creative group, we will together discuss and outline strategy based on our conversations with Amy (Pascal), Michael (Lynton) and Doug (Belgrad). Individually, we will run own projects. But already we’re reading each other’s scripts, attending each other’s previews. While we’re going to have our own individual slates, we’re very much together making high-level decisions about the slate as a whole.

Mike, agents and producers said you were discreetly calling producers to encourage them to submit their best material to you.
MDL:  I’ve not made a single phone call like that, I wouldn’t do that in a billion years. If I’m saying anything, I’m saying ‘Bring your projects to Columbia.’

HM: Our hope in Mike joining the team is that he is going to generate his own projects to complement the slate we already have so I would hope he’d be doing that. We’re looking forward to Mike bolstering the slate. I don’t see why there’d be anything wrong with that.

Mike, there’s a lot of talk about why you took this job and it’s still a subject of great speculation. What would you tell those people?
MDL: Amy and Doug and Hannah’s pitch to me was really, really compelling. I’ve been here as a producer for nine years. The movies I’m most proud of that have been the most successful have been at Columbia. That’s not to say I didn’t enjoy the movies I made at other studios, but it’s clear that the universe was telling me that this group and I are a good combination… But because of the way that I feel about these people and the nine-year history I’ve had here, it was just too good to turn down. It seemed like an invitation to join a team that I was already in business with for almost a decade and had the most satisfying and successful experiences of my career with. That’s really why I did it, it felt like an invitation to a place where I was already successful and had great chemistry with the people.

What was that pitch?
MDL: Look, I reached a level as a producer that I was really proud of, but it wasn’t like I became Scott Rudin or Jerry Bruckheimer. My taste is eclectic and I wasn’t known for one thing. It’s challenging to be a producer in that environment, and you kind of go one-by-one and you handcraft your movie. Joining a team like the one at Columbia, I get to work with a variety of filmmakers and producers who previously had been cut off to me because they had producers already. Filmmakers that I used to work with at New Line and DreamWorks that I couldn’t work with anymore because they all had producers. Joining the executive ranks at Columbia, I got to go back to all my relationships and touch base with all those people and make our pitch for Columbia as a home studio. It hit me at a time in my life where, nine years as a solo, non-writing producer just didn’t look as good to me as being part of this team and taking the studio with Hannah and Doug where everybody wants it to go, which is a haven for writers, directors and filmmakers. That’s the truth, it just felt exciting.

Does it feel weird that people are speculating about it?
MDL: I think it’s perfectly natural. From the outside looking in, it looked like I was having a great time as a producer and it was. The last five years were incredibly rewarding and they were all with Sony Pictures, literally. People have asked me, why would you leave that? It’s a choice between being artisanal, going one by one, or having input and managing a slate of pictures with Hannah and Doug.

Hannah, you came over from Sony Pictures Animation and I’m told you still work closely with them to develop a very ambitious slate. Doesn’t that take you away from your responsibilities at Columbia?
HM: I don’t have any official responsibility at Sony Animation, my only responsibility is here to Columbia. I have close relationships with Bob Osher and Michelle Raimo and as much as we are good colleagues to one another and I still weigh in every now and then, that is not a part of my day-to-day job, which at this point, is working with Mike and Doug to oversee the projects we’re making here at Columbia Pictures.

How did you divide things up between you?
HM: It was shockingly easy when Mike and I sat down together to look at the slate. Obviously, any of the movies that he was on as a producer, he is now running as an executive because that makes sense. There were several franchises that over the past couple of years since I’ve been in this position, I’ve been working hard to put together, like “Uncharted” and “Masters of the Universe” and the “Spider-Man” franchise, which obviously I’m still on. And then there were other projects that were deep in development that we were able to divide based on either relationships that we have or our taste. I think there’s a certain point at which there’s an overlap in our tastes, but there are also areas where we differ and complement one another and I think that was part of what was attractive about us working together as partners. I have to say, it was surprisingly easy to go through it and say ‘it really makes sense for you to have this one.’ I think it almost speaks to the spirit of how we’re working together already. We’re both, almost to a fault, incredibly generous and sensitive to one another in our decision making and I think that bodes well for how it’s going to continue.

What kind of movies would you like to bring to Sony? What’s missing from the slate?
MDL: We’re all prisoners of our skill set. For better or worse, I’m always kind of that twin track of “Boogie Nights,” “Wag the Dog,” “Captain Phillips,” “Moneyball,” “Rush Hour” and “Old School.” I tend to fall into a genre that I hope is elevated. It’s either that, or slightly more adult fare that you hope will cross over. I hope to deliver those with some consistency at Columbia.

Doesn’t every studio want franchises?
MDL: Totally, but it’s can’t be 12 months a year of franchises. I think it’s good to have a diverse slate because the audience is diversified. I think you can walk and chew gum at the same time and you can have a steady stream of tentpoles and franchises to bolster a diversified slate. And I’ll always believe that’s good for the movie business. Hannah and I are both going to be looking for franchises and tentpoles and quality movies that you can slot in the spring and fall.

Imagine you’re a lower-level executive at Sony or at one of the production companies based on the lot. Do you ever feel like there’s too many cooks in the kitchen between the two of you and Doug and Amy and Michael? That seems like an like an awful lot of people to please…
HM: This is a studio that’s had a lot of stability and the executives here aren’t use to a lot of change, so it’s a transition period for everybody. A few weeks from now or a month from now, everybody will settle into a new rhythm with Mike and I. So anybody who has questions or is speculating at this time will be reassured.

MDL: It’s completely understandable, it’s just brand new. We just need some practice for a while and everyone will calm down.

HM: From the minute we started talking about this, we’ve been behaving in such a partnerly way with one another. It’s unfortunate that there are any comments to the contrary. It’s the antithesis of everything that has been happening thus far.

What are the big projects you’re shepherding?
HM: The “Spider-Man” franchise continues, and we’re working on “Sinister Six” and “Venom.” We recently announced that we attached a director to “Uncharted” and we’re meeting with directors now for “Masters of the Universe.” I also have a young adult book called “The Fifth Wave” and we’re looking forward to that project.

Have you guys signed Chloe Moretz yet?
HM: We have not made a deal with any actor on that project yet. Not even negotiations. Not yet.

And Mike?
MDL: I’m managing the next Dan Brown book, “Inferno,” with Imagine, and Shane Black’s follow-up to “Iron Man 3,” “Doc Savage,” which is an original franchise.