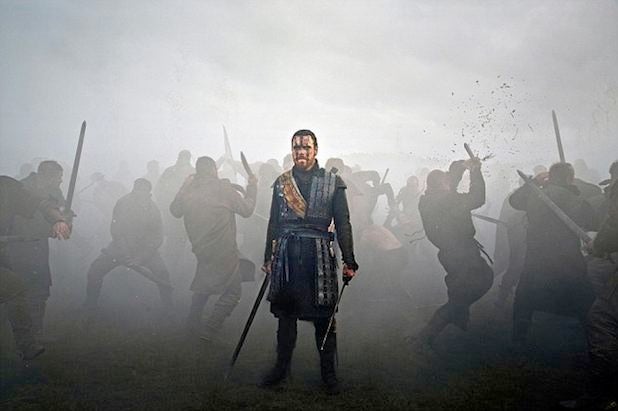 The Oscar-nominated “12 Years a Slave” star is portraying the Scottish king in director Justin Kurzel‘s adaptation of William Shakespeare‘s classic play. The tragedy is about a general urged by his wife (Marion Cotillard) to steal the throne for himself after witches prophesy that he will one day become the king of Scotland.

“I don’t think Macbeth is evil. I think he’s damaged. When we meet him, he’s a man who’s as good as his circumstances will allow. He serves his king loyally and looks after his soldiers,” Fassbender explained during an on-set interview with the Daily Mail. “Evil is a cloudy word, and something that’s not going to inform me to play the character in any other way than pantomime.”

The U.K. outlet gave audiences the first look at Fassbender as Macbeth (above), as well as Cotillard as the woman who drives him to murder King Duncan.

Also read: I Don’t Know What Bryan Singer Did, and Neither Do You

In Fassbender’s mind, Macbeth’s descent into madness isn’t caused simply by a lust for power, but a result of the bloody battles he has fought as leader of the Scottish army.

“He’s suffering from post-traumatic stress disorder. It makes total sense, when you think about it. Justin set the seed of the idea in my head,” Fassbender said. “This trauma is something we know about. In World War I they called it battle fatigue, and it was probably more horrific in Macbeth’s days, when they were killing with their bare hands, and driving a blade through bodies. He’s having these hallucinations, and he needs to return to the violence to find some sort of clarity, or peace.”

U.K. audiences will see Fassbender’s portrayal of “Macbeth” on the big screen in early 2015, but it’s not clear when the adaptation from the producers of “The King’s Speech” will hit U.S. theaters.

Here’s another still from the upcoming film: